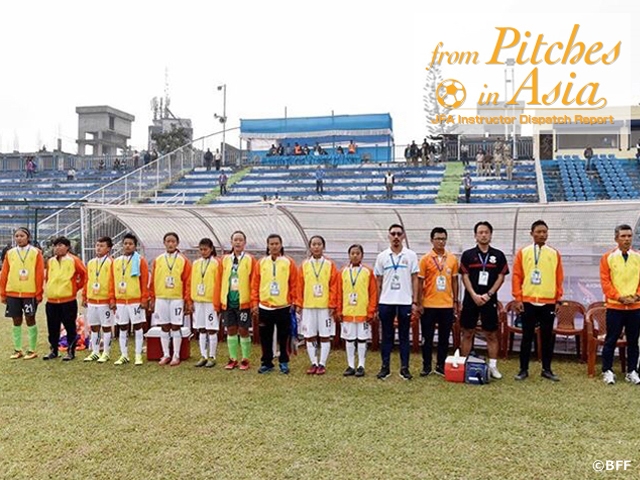 The 25th issue of “From Pitches in Asia,” reporting voices of instructors in Asian countries, is from Mr. HANITA Atsushi who has taken up a role as a Bhutan National Team Goalkeeper Coach.

Bhutan capital Thimphu, where I live, has an elevation of 2400 metres with similar temperatures as Japan, but the daytime sun is quite dazzling. It has been a dry season since mid-October, and it rains little until March. It is said that ‘no one loves hot and spicy food more than Bhutanese’. Since the country is adjacent to India, there are plenty of curry dishes and food menus with hot pepper. I am getting used to hot food, but stray dogs roaming around the town are different story. They require caution and especially the ones in front of meat shops can be quite vicious. Additionally, there are no train services in Bhutan, and the main transportation is vehicles like buses or taxies. Furthermore, there are no traffic lights, so I am always having trouble in what to prioritise. Lastly, Tibet Buddhism is the largest religion here, and I am seeing plenty of religious influences in their daily lives.

The dormitory for the football academy is located next to the Bhutan Football Federation. A little less than 60 players from three separate categories—U-19, U-17 and U-16—stay together this year, as they hold training twice a day before school classes and after school at an artificial turf field next to their lodging. Only a few players in the national (first) team are professional, and most of the players practise after work or school.

The women's academy is located in Gelephu, near the border with India and approximately nine-hour drive south of Thimphu.

Coaching Goalkeepers of All Categories

I am focusing on basic skills and fundamentals when instructing academy players. By improving the preparation and judgement skills before the ball is coming, I have set my goal to strengthen the entire defence led by goalkeepers. I often encourage the players to analyse what they need to work on before training. There are two reasons for undertaking such analysis. First of all, even when I am absent due to national team duties I am hoping that they can evaluate their own training including the exercises I gave them during my presence. Secondly, I believe the ability to think on their own is also important if they were to become national team players or even coaches who can help foster Bhutanese football in the future.

Led by the German coach who expects them to play differently depending on their opponents, my aim for the top national team is to improve their technical and judgement skills in training where they are instructed to think and perform as if they were playing actual matches. The average height of Bhutanese players is approximately the same as Japanese, and I could hardly say that they are tall compared to other countries. Before the last Bangladesh match, our team spent a lot of time working on dealing with crosses and long balls that the opponents often use.

I am seeing an increase in overseas staff since last October, including the national team coach from Germany, the women's national team coach from South Korea and the academy and goalkeeper coaches from Japan. Bhutanese people with mild and placid personalities enjoy more relaxed lifestyles, while the academy players are expected to show strict discipline. Fortunately, no longer the academy see any members who come in late or are absent without notice. Some academy players do voluntary training, and I can observe a significant change in their mentality towards football. Before I took the role as a goalkeeper coach, the team did not have an instructor specialised in goalkeeping. Not only the players seem to enjoy this specialised training, but also coaches from domestic clubs come and visit our practice sessions. 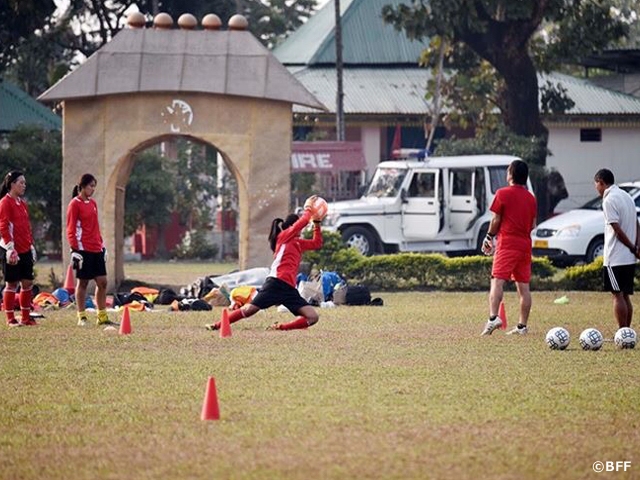 In the SAFF Women's Championship at the end of last year, we lost to Nepal 0-8 and to Maldives 1-3. Actually, the average age of the Bhutan National Women's Team is only seventeen, and this is the squad that will grow from now on. We will work hard to improve by the next SAFF Women's Championship. During the tournament, I had an opportunity to talk with TAKEDA Chiaki (Technical Director of All Nepal Football Association) and KAWAMOTO Naoko (Maldives National Women's Team Coach), both of whom dispatched from the JFA. In the South Asian region, India and Nepal stand out from the rest of the group in both men's and women's football. Each country has its own culture and religion. But the facilities and their approach towards football development are quite similar. Unfortunately, Bhutan's women team are struggling to improve as they do not have many chances to play international matches.

Our U-19 Team is now playing Bhutan's domestic Thimphu League. They are making efforts to finish in higher place this season. Our U-16 Team is preparing for the AFC U-16 Championship qualifiers to be held in September. They have been training together with U-19 Team before playing international friendly matches in Sri Lanka scheduled this March. Through matches against Sri Lanka, Nepal and Japan, I believe they can check their current position in international football. Lastly, the top national team are looking to qualify for the Asian Cup by getting through the final qualifiers that will begin on Tuesday 28 March. Oman, Palestine and Maldives are in the same group. They fell short to Maldives twice in the second-round group stage matches, so they are looking to avenge the previous defeats this time. 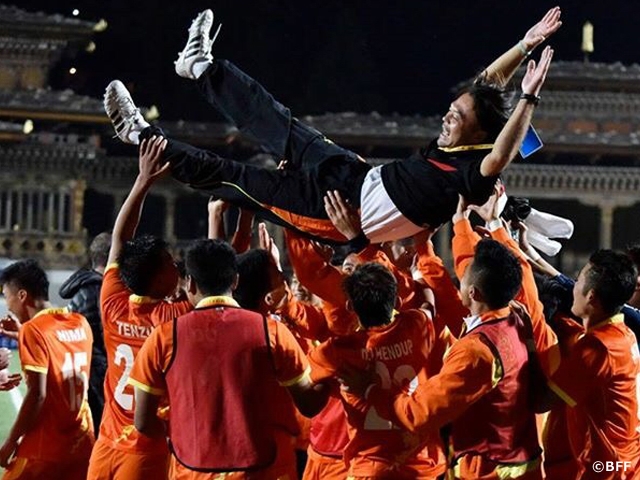 Kingdom of Bhutan got out of the bottom of the FIFA ranking in March 2015, and now they are looking for further advancement in cooperation with the local authorities and many supporters.