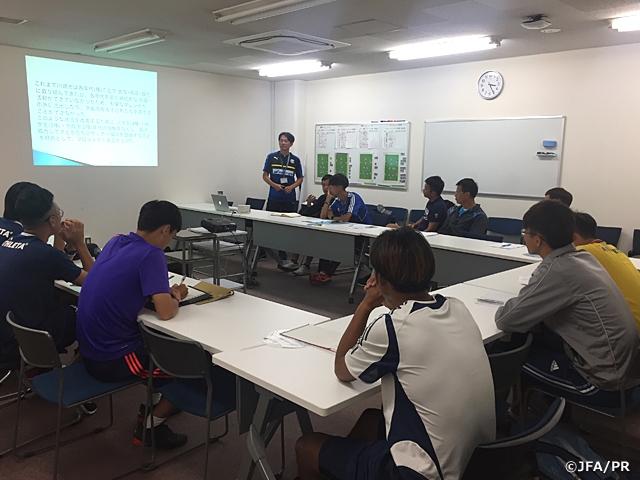 Currently being dispatched by the Japan Football Association (JFA) as a technical director of Chinese Taipei; WATANABE Tsutomu, has led the team of 13 coaches from Chinese Taipei to observe the various coaching methods in Japan from 29 July until 8 August.

Their tour started in Kawasaki, where Kawasaki Frontale gave presentations on club principles, projects of academy development and various activities undertaken with the support of the local community. Also, they watched the match between Kawasaki Frontale and Jubilo Iwata at Todoroki Athletics Stadium as well as the matches from the Kids’ League of Kawasaki Frontale at Fujitsu Stadium Kawasaki.

The group then moved to Kofu, where they observed practice sessions of the top and U-14 teams of Ventforet Kofu. In addition, the presentation on coaching methods was given by TSUKADA Yuji, Coach of JFA National Training Centre, followed by a practical training using the methods being taught to instruct the pupils in elementary school at the local sports club. 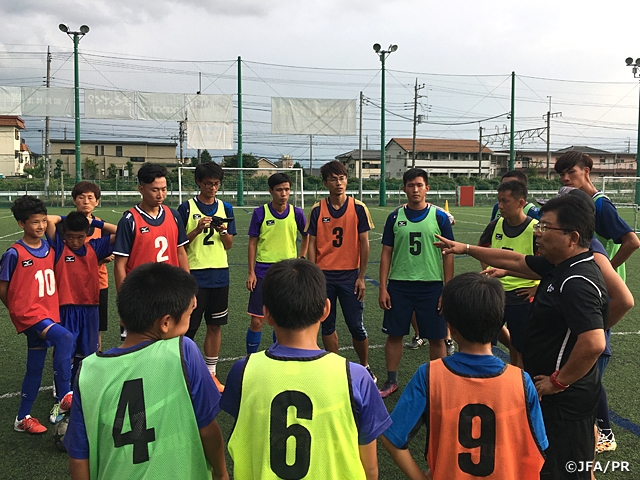 Lastly, they attended the “JFA Football Future Programme (FFP) Training Centre Seminar U-12” in Gotemba City and watched the matches of U-12 Academy Teams of prefectural training centres across the nation. Moreover, they participated in the JFA Licensed Coaches Training Course, where they reviewed the basics of coaching with the Japanese instructors.

WATANABE Tsutomu, Technical Director of Chinese Taipei
This year marks our third visitation to Japan. With the great support from the JFA, we were able to have a productive inspection tour. We visited Todoroki Athletics Stadium, where the facilities were well planned and maintained, and experienced the excitement of a J.League match in live. Also, the presentation by Mr. Kawaguchi from the Kawasaki Frontale Office regarding the projects of academy development was highly informative and gave us many ideas that we can work on.

In Kofu, we observe practice sessions of the top and U-14 teams in addition to visiting a summer camp hosted by the club and learned about their philosophy and approach to club management. Thus, after hearing the presentation by TSUKADA Yuji, Coach of JFA National Training Centre, at the local youth sports club, we were given a precious opportunity to instruct the U-12 children.

One of the main objectives of our visitation was attending the FFP seminar, where we deepened our understanding of JFA’s approach on youth development. The seminar was a comprehensive programme involving not only the individuals, but also instructors, referees, guardians and all others who take part in the development of youth players. It has given us a clear direction in which we can accelerate the youth development in Chinese Taipei. Moreover, I have no doubt that the presentations from Director of Coaches Training YAMAGUCHI Takafumi and the practical training sessions by Youth Development Director SUDO Shigemitsu have become a great asset for the visiting instructors as well. I would like to express my deepest gratitude to all of the people who have supported our visitation trip in Japan.

CHAO CHIH-HUNG, U-12 Boys and Girls Coach
I was shocked and, at the same time, deeply moved by participating in the instructor’s training course in Japan. During the FFP seminar, beside observing the high level of football techniques demonstrated by the Japanese academy players, I realised that there is a huge gap between the children of same age-group in Chinese Taipei and Japan. One of the mothers of an academy player stated, ‘I do not wish to hinder my child from doing what he really wants. He might be inexperienced yet, but I hope he continues to challenge as he grows up and believe in himself as well.’ There are several questions I must ask here. Are we capable of showing the same respect to the dreams of our children in Chinese Taipei? Aren’t we paying too much attention to our children’s education? It would be difficult to change our common views in the short term, but I would like to start by changing the perspectives of the people where I coach.

WU HIS-HUA, U-12 Coach
The most important achievement from attending the instructor’s training course in Japan was that I realised the top standard of football in Asia. The level of professionalism demonstrated not only by the players but also the staff of FFP tournaments was one of the issues we need to address back in Chinese Taipei. During this visitation, I was deeply moved by the fact that Japan has given the children both a dream and a plan. By giving them a clear pathway, Japan has created a fundamental basis to achieve that goal. I will be looking to accelerate the development of coaches training system and methods in Chinese Taipei and come up with a plan to establish a professional league in the future.

WU PO-HAN, U-14 Coach
This instructor’s training course in Japan was truly an interesting experience for me. Even Japan, whom I consider to have the best football culture in Asia, is constantly striving to improve and accelerate the development of their football. The support from surroundings is important for fostering football as well. Furthermore, it was wonderful to observe that a plan involving a support from the local community can be beneficial to the society as a whole. 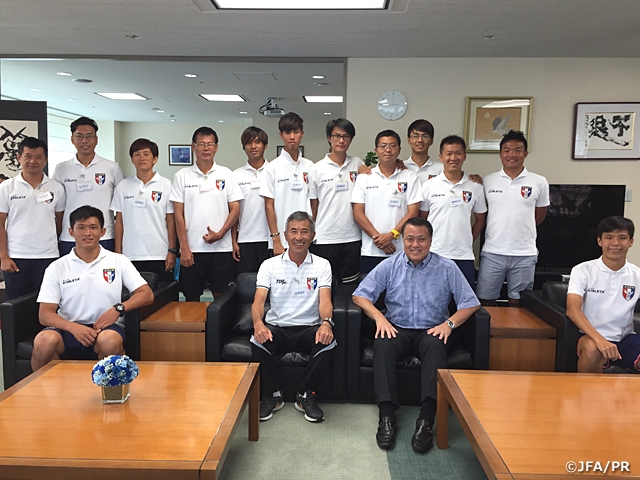