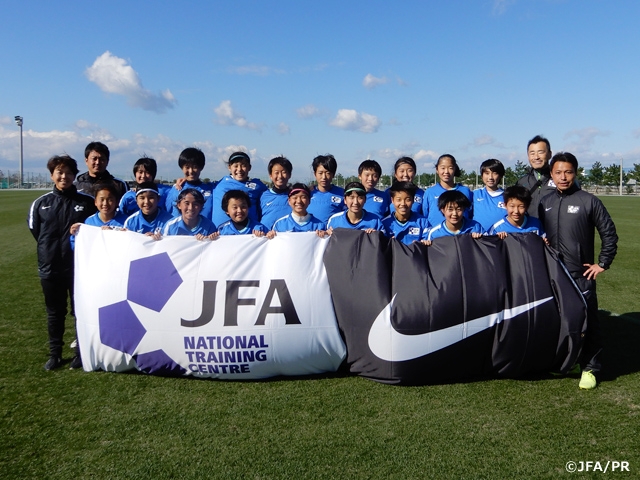 On the final day of the JFA Elite Programme U-14 Japan-Korea Exchange, the captains of both Japanese and Korean teams praised their hard work during the exchange programme before the Korean players departed from Japan in the morning on Monday 20 November.

On the same day, the Japanese selection team played an intrasquad game to wrap up the activities of the Elite Programme.

At the closing meeting, coach NISHIMURA Yosuke gave his final thoughts, ‘Daily preparations and hard work will give you the chance to become a part of the U-15 Japan Women's Selection Team in 2018, a member of the AFC U-16 Women's Championship squad in 2019 and eventually a national-team player for the FIFA U -17 Women's World Cup in 2020.’

Assistant coach TOSHIMITSU Chiharu had put together a collection of footages from the first day of the camp and showed the video to his the team to review all the activities that were held during the exchange. JFA Elite Programme U-14, which started from Wednesday 15, lasted for six days and now has come to an end. 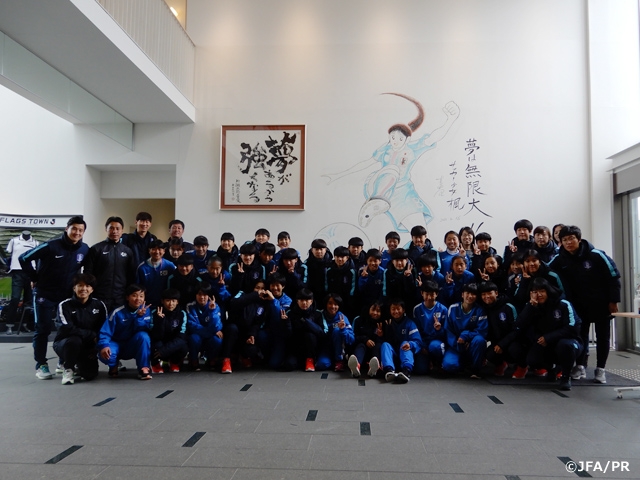 NISHIMURA Yosuke, Coach
Starting the JFA Elite Programme with U-13 Canon Girls Camp in May last year, we have completed all of our six activities including our domestic training camps, our trips to Korea and China and the Japan-Korea Exchange programme which we just ended. On the first day of the programme, we discussed about the “promises” that the JFA Elite players must agree to keep during their activities here as well as what they were expected to act on and off the pitch. All the players tried to think on their own and created a wonderful camp together. I must say that I saw significant improvements in these players by participating in this programme.

We had three main themes in the U-14 selection team: (1) taking the initiative in both offence and defence; (2) improving continuity, combination and collectivity; and (3) making swift transitions. We explained about these themes in lectures and then worked on them in training as we tried to improve the fundamental skills and the build-up plays as well as the tactical understanding of the individual player and the team as a whole. All the players gave their best in the matches against the Korean national team and OSAKA Gakugei Senior High School. Not only did they understand their requirements, but they went all out to display them on the pitch. As a result, we made plenty of achievements and, at the same time, found many areas that we need to work on in the future.

At our last meeting, I gave my final thoughts to my player that daily preparations with a clear goal and continuous efforts to attain that goal will give each one of the players a chance to take part in the U-15 training camps, become a member of U-16 squad and participate in the AFC Championship and eventually a national-team player for the FIFA U-17 World Cup in 2020. I am wishing the best to all the players. Lastly, I express my gratitude to all the players who participated in any one of the six training camps of the programme and the staff and all others who supported our activities.

FP #6 ARIYOSHI Aimi (FUKUOKA JO GAKUIN JUNIOR HIGH SCHOOL)
In this Elite Programme, we practised with themes “attacking, defending, and offensive and defensive transitions”. While practising the transitions from defending to attacking, we tried to make a quicker switch and tried to get more involved in the attacking plays. During the training from making a switch from the offence to defence, I attempted to coordinate the plays with my teammates to steal the ball. In the first match against Korea, we edged 1-0, but it was the game where we had plenty of issues that we needed to address. In the second match, I personally tried to get more involved in both attacking and defensive plays. I was brought on midway into the game, but went on the overlap and sent in several good crosses that led to team’s scoring. I couldn’t speak the Korean language, but spoke to them in English and used gestures to communicate and made friends while talking to each other with smiles. There were certain instructions that were given during the programme, “0 second to make transition, 3 second to coordinate and 5 second spirits for the team”. I will continue to work on those once I get back to my team and further improve myself.

FP #11 OGIKUBO Yuri (Cerezo Osaka Sakai Girls)
In the six days, I learned about the passing speed and the timing of receive a good pass, while I kept in mind how to exploit the space behind the backline. In defence, we were given instructions on strong and quick approach on the ball, tenacity, physical strength and predictions. Off the pitch, I made an constant effort to be aware of the surroundings before I acted, and did not forget to thank all the people who supported me in this camp as well as making conversations with different people. During the exchange with the Korean players, I had a hard time communicating at the beginning, but spoke English and used gestures, and got to know each other quite well at the end. We won the practice games, but also found many areas that we need to improve and realised that we haven’t reach the level to compete against the bests in the world. I also need to think how I can defend and find ways to attack against the physically stronger opponent. I will take back all the things that I learned during the Elite Programme to my team and will practise thinking about the three key ideas that were discussed during our training, “0 second to make transition, 3 second to coordinate and 5 second spirits for the team”. I am looking to become a player who is needed by the team.

FP #18 OBA Yuzuki (Amagasaki Ladies U-15/JFA Academy Sakai)
I really learned a lot in the last six days. In training, I focused on the four key ideas, “0 second to make transition, 3 second to coordinate, 5 second spirits for the team and always returning to our end of the pitch”. Even when I did not have possession of the ball, I was constantly thinking about covering and shifting. In defence, I took advantage of my strength in anticipating and intercepting the ball and was able to steal the ball quicker than anyone else. Off the pitch, I was able to switch between “ON” and “OFF”, and ate when I had to eat and rested when I needed to take a rest. I also learned the importance of stretching and would like to continue doing so when I get back to my team. I had a hard time communicating with Korean players, but still managed to express myself using gestures and smiles. Going through this programme, I found a lot of areas that I need to work on. Those were controlling the ball with left foot, the quality of passing and shooting, and the distance between the opponent and I when I defended. I will keep these in mind when I get back to my team and work hard to improve them as well.