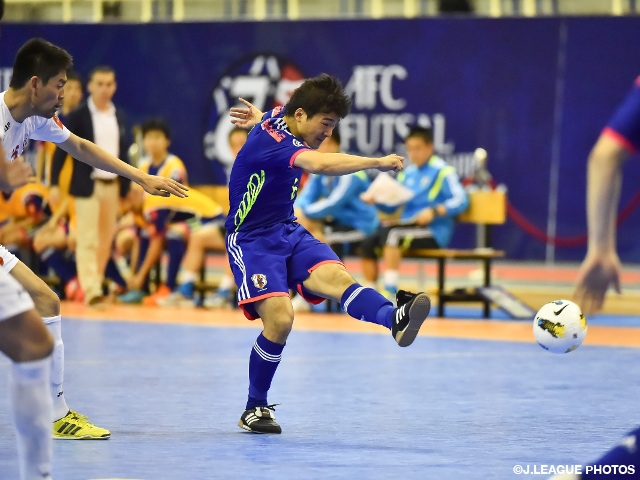 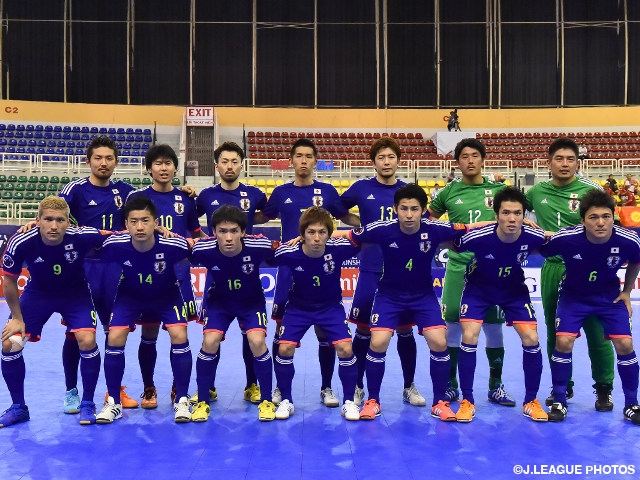 Futsal Japan National Team played the third match in the group stage againstKyrgyz Republic to advance to the quarterfinals.

Japan had to win this match, withKyrgyz Republic on a points advantage following one win and one draw in their previous games. The match kicked off at 18:30, the same time as Korea's match against Uzbekistan in the same group.

If they had lost, Japan would have been knocked out at the group stage for the first time. Even with a draw, Korea had to win against Uzbekistan for Japan to advance to the next stage. Under pressure, Japan struck first after four minutes with a goal from Minamoto, assisted by Hoshi. In the 9th minute Nibuya slotted in Yoshikawa’s rebound, further opening up the lead. Japan continued to halt the Kyrgyz attack with an aggressive defence, and went into half-time with Osodo’s additional goal at 17 minutes, making it 3-0.

Japan struggled to score in the second half amid a Kyrgyz fight back, with the score remaining 3-0 for much of the half. Six minutes from time,Kyrgyz Republic threw everything into attack. Japan responded calmly and after a minute Osodo sank a shot into the unguarded goal, intercepting a Kyrgyz pass. Japan held out against the Kyrgyz attack for the remainder of the game and the score finished at 4-0, putting Japan through to the quarterfinals.

Japan's quarterfinal will be on Wednesday 8 May against Thailand, who topped group C.

Miguel Rodrigo, Head Coach
We got a good result thanks to our strong defence against the Kyrgyz attack. It was as mentally tough as the final, because we had to win this match. I have to say, though, it was good preparation, thinking of the quarterfinals. Three goals in the fist half decided the match, and in the second half we kept good possession of the ball among the four forwards getting that additional score, and using the rest of the time wisely. I think we reacted very well againstKyrgyz Republic’s all-out attack. All we need now is to have a good rest and recover.

TAKITA Manabu（TAKITA Manabu）
We survived the group stage, if only in second place. I was quite relieved if I am honest. Our goal, however, is to win the championship. Having come to Vietnam to represent Japan, we feel the pressure ourselves as a team. We will do our best in the knockout stage, drawing positively on the pressure and responsibility. The supporters and cheering at the matches, as well as from Japan, give us strength. We will stand together and do our best to put a smile on our faces by the end of the competition.

MINAMOTO Akira（Fuchu Athletic F.C.）
We were under huge pressure at today's match, as a draw was no good if we wanted to advance to the quarterfinals. I was pleased to the first to score, knowing an early goal was crucial. I felt strongly that our team has improved, playing calmly under pressure like this. Having said that, we have not won anything yet. We will prepare for the next match so we don't repeat the same mistakes.

YOSHIKAWA Tomoki（Nagoya Oceans）
It was great that we had a clear victory today. We had moved on from the defeat the day before yesterday. We pulled through together and this brought us the win. However, the important stage has just started. We will focus entirely on the coming three matches to win the Asian Championship.