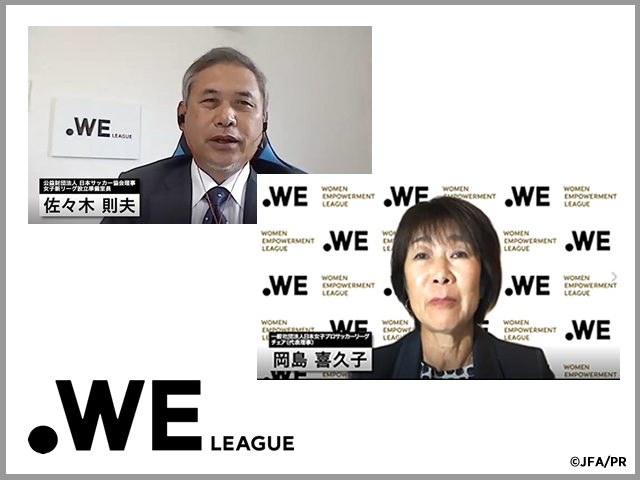 Ms. Okajima was named as chair of Japan Women's Football League at its general meeting of members held on Friday 3 July. The decision was reported to the executive committee of Japan Football Association (JFA) on Thursday 9, before it was made public that she was named as the first chair of the WE League, making this online press conference her first appearance since assuming the position. Chair Okajima participated from the USA, as she currently resides in Baltimore, Maryland, while Mr. SASAKI Norio, who served as the general manager for the foundation of the new women’s league, also appeared in the press conference.

OKAJIMA Kikuko, Chair of WE League
First of all, I would like to express my deepest condolences and sympathies to those affected by COVID-19. I would also like to offer my heartfelt sympathy to the people affected by the torrential rain and sediment disasters that struck the Kyushu region, Gifu prefecture, and Nagano prefecture.

The establishment of the WE League is a wonderful news for those involved in women’s football. It makes me want to congratulate all female football players in Japan. When I first started playing football in 1972, there were very few women’s football teams, making it extremely hard to secure training grounds, coaches, and opponents to play against. During junior high and high school, my dream was to play in an international football match, which came true when I participated in a tournament in Taiwan as a member of FC Jinnan. From that point on, my desire to form the women’s national team grew stronger, which led me to be involved with the foundation of Japan Women's Football Federation, where I served as a member of the executive committee and as the executive secretary. In the 1980s, I participated in several tournaments overseas along with coach TAKAKURA Asako of Nadeshiko Japan, Ms. HONDA Midori, who is currently a coach in the Nadeshiko League, and other players like Ms. NODA Akemi, which gave me a sense of accomplishment to some degree. During a tournament held at Xi'an, China PR, we played in front of a sell-out crowd, which allowed me to experience in first-hand how the crowd can impact the players. We hope to give our players the same experience at the WE League.

After graduating from university, I have always placed myself in the financial industry, but the initial reason why I chose to work for a foreign financial institute as a new graduate is because I did not want to work on Saturdays. Since I always trained or had matches in the weekend, I wanted to avoid companies that required me to work on Saturdays. However, as time progressed, I stared to do well at my work. I was given the opportunity to attend corporate training in New York for a year and worked as a stock trader at a Japanese securities firm, and the time and energy spent for football gradually shifted towards my work. I relocated to the USA after getting married, where I continued to work for banks and securities firms while raising a child. I feel like I was only able to continue with my career because I lived in the USA. The name “WE League” stands for “Women Empowerment League,” and I believe the USA is at least 20 years ahead of Japan in that aspect. I hope to add new perspective from the USA and make proposals that can be accepted in the Japanese society.

I was introduced to the WE League through Mr. KANEDA Nobutoshi. I first met Mr. Kaneda in 2018, where we shared the same table at the 50th anniversary party of the bronze medal won at the Mexico Summer Olympics. At the time, Mr. Kaneda had the idea of making J.League clubs to have women’s teams, and after seeing my business card from Merrill Lynch, he asked if I can help realise his idea. He introduced me to J.League Chairman MURAI (Mitsuru) then and there. Following that party, I spoke with one of my acquaintances at JFA to seek if there is anything I can do to help professionalise the Nadeshiko League. I then had a meeting with Chair IMAI (Junko) of the Women's Committee and helped search for partner companies. With the spread of COVID-19, online meetings have become the new normal, which opened new opportunities for someone like me, who lives in the USA, to be selected for a major role in this new project.

While we are striving to bring the league principle and vision to reality, perhaps the most important aspect is to have young female football players come watch live matches at the stadium. In order to make WE Leaguers a dream job for young girls, their performance must be seen, and we plan to create an exciting game experience at the stadium by providing opportunities for the viewers to interact with the players. This cannot be made possible without the support of the prefectural FAs. “WE” also means, you and me. The league will not be all about the players, as we are planning on reflecting suggestions from our fans through the usage of SNS. Also, to make this league the greatest league in the world, we need to recruit world class players, managers, and coaches to Japan. I will continue to reside in the USA, one of the top countries in the women’s football world, and I hope to take advantage of the situation by recruiting players and coaches from the USA. During the 1990s, when Japan was in the midst of the bubble economy, many top class women’s football players came from countries like Norway, Canada, and China PR to play in the L.League. Being able to face the world’s top players at their own country is a priceless experience, and we hope to provide such experience for the women’s football players in Japan. These are just some of the ideas we have to broaden the base of women’s football in Japan, and hopefully help Nadeshiko Japan become the world champions again.

Support from JFA and the J.League is essential for the WE League. I have recently spoke with Chairman Murai, where he mentioned that while we can learn from the success of J.League, we should also take on new challenges without fearing failure. Women empowerment cannot be realised just with the efforts of women. I will give my utmost efforts to get more men involved, try new ideas that will help develop women’s football in Japan, and realise a society where each and every individual can truly shine. 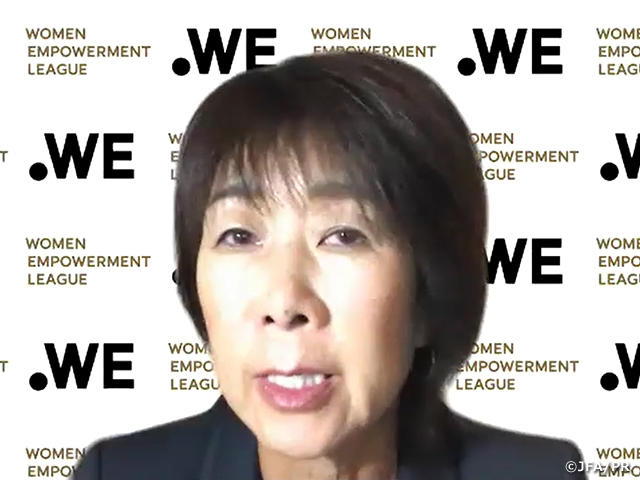 SASAKI Norio, General Manager for the foundation of the new women’s league
The committee for the foundation of the new women’s league has conducted nearly 50 meetings. As the league name suggests, we have prepared the league with the intention to empower women, and we have made tireless efforts to lay a solid foundation for a league that can have strong impact, not limited to the football community, but to the entire society. Today, we are proud to announce Ms. Okajima as the first chair of the WE League, who we believe is the perfect fit for this position. We genuinely appreciate Ms. Okajima for accepting this position and we would be grateful for your support towards Ms. Okajima ahead of the kick-off of the WE League. 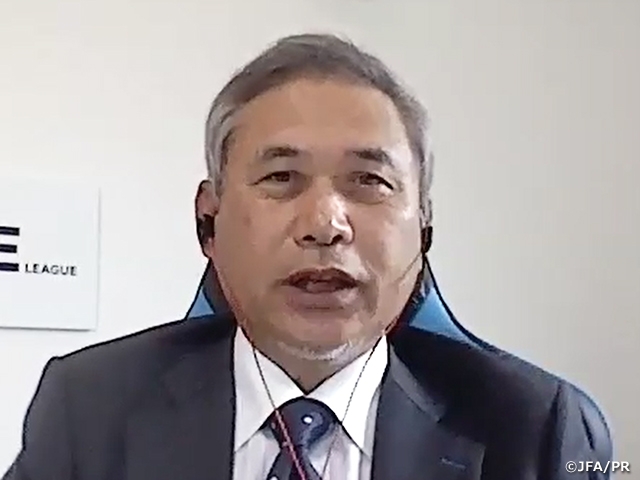