The Japan Football Association (JFA) will celebrate its 100th anniversary on Friday 10 September. To commemorate the 100th anniversary, we will post a countdown column that looks back from the founding in 1921 to the present. The first article was written by football journalist Mr. GOTO Takeo about the early days of Japanese football, from the introduction of football to the 1950s.

The founding of the Greater Japan Football Association

After the Meiji Restoration, Japan rapidly promoted modernisation (westernisation) in all fields such as politics, economy, military, law, and art, under the name of “Bunmei Kaika.” Physical education was incorporated as part of the modernisation of education, which helped promote modern sports to the general public. Football was also introduced during this movement and started to be played at old junior high schools (current high schools) in various regions, but the first full-scale efforts to strengthen football was carried out by the students at Tokyo Higher Normal School (current University of Tsukuba), which included NAKAMURA Kakunosuke. It was around 1903. They modelled themselves after foreign teams from Yokohama and other locations.

In the latter half of the 1910s, the number of schools working to strengthen their football teams increased, especially among old junior high schools, and tournaments started to be held at each region. Then, in 1919, the FA Silver Cup was presented by the Football Association (governing body of English football) “to be awarded to the winning team of the national championship.” This idea came from Assistant Secretary WILLIAM Haigh, who was involved with some of the Japanese football players, as the British Embassy Tokyo made the request to the FA through their country’s Foreign Office.

This led to the establishment of the Greater Japan Football Association in September 1921. In November of the same year, the “National Association Football Tournament” was held on the grass field in Hibiya Park in Tokyo, and the “Tokyo Football Club,” who consisted of former students from the Tokyo Higher Normal School, became the inaugural champion. This is the beginning of the All Japan Football Championship, and following the war in 1951, the winning team was awarded with the Emperor's Cup, and the 2021 edition of the Emperor's Cup JFA Japan Football Championship will be the 101st tournament. 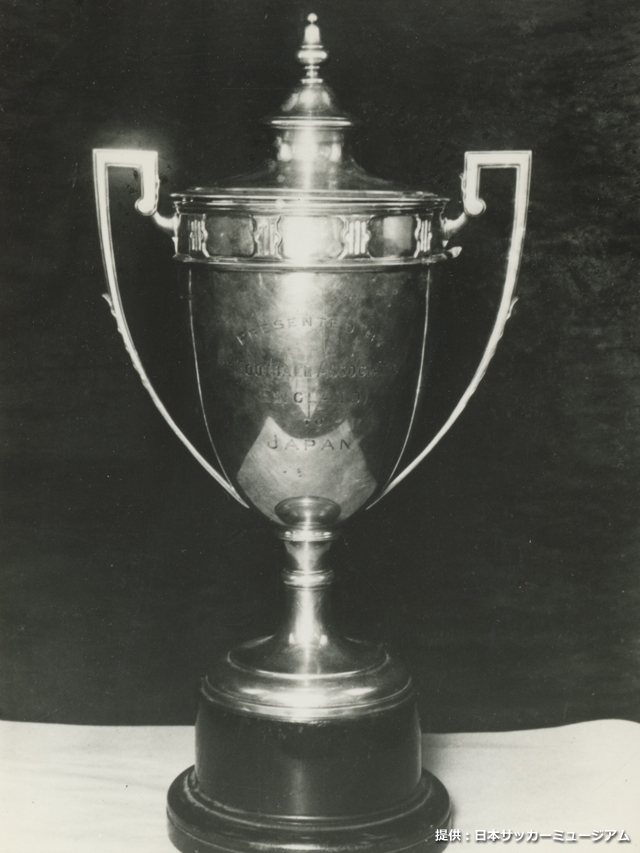 International competitions have already been held by 1917, even before the association was established. This is a story from the 3rd Far Eastern Championship Games held in Tokyo. The Far Eastern Championship Games was a multi-sport event in which Japan, China, and the Philippines participated to compete in various sports such as athletics, swimming, baseball, and tennis, and it is considered to be a precursor to the Asian Games.

It was still difficult to form an all-Japan selection team at the time, so Tokyo Higher Normal School played in the competition as the representative of Japan but lost to China (South China Football Club in Hong Kong) 0-5 and to the Philippines 2-15. Sports were popular in Hong Kong, which was a British colony, and in the Philippines, which was a US territory. In addition, Paulino ALCANTARA, a Filipino-Spanish player who was the ace of FC Barcelona at the time, participated the competition as a member of the Philippine National Team.

Therefore, the Japanese football world had set their goal to beat China and the Philippines throughout the 1920s.

In the latter half of the 1920s, university teams who consisted of older players than normal schools and old junior high schools began to lead Japanese football scene, and the Kanto and Kansai University Leagues became the top leagues in Japan. At the 8th Far Eastern Championship Games held in Shanghai in 1927, Waseda University WMW, who participated as the representative of Japan, defeated the Philippines to record Japan’s first victory in an international competition. Furthermore, at the 9th tournament held in Tokyo in 1930, the all-Japan selection team was formed for the first time, which mainly consisted of players of Tokyo Imperial University (current University of Tokyo), who dominated the Kanto University League, and participated as the representative of Japan. After defeating the Philippines and drawing against China 3-3, both Japan and China were crowned as champions. This was the first international title won by Japan.

The Far Eastern Championship Games eventually disappeared in 1934 due to political conflict between Japan and China. For the Japanese football world, their next goal became the Olympics. 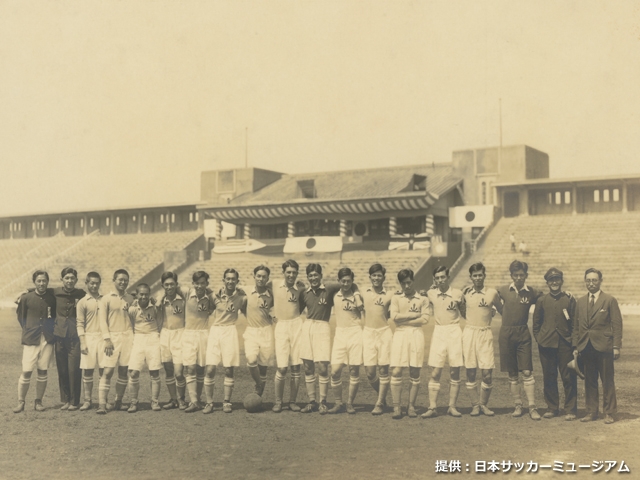 Leaving a mark at the Olympics

Japan’s first participation at the Olympics was at Berlin in 1936, in which an all-Japan selection team consisting of mainly the plyers from Waseda University, who has won back to back titles at the Kanto University League, participated. The tournament was held in a knock-out format, where Japan faced Sweden, a European powerhouse that would go onto finish fourth in the 3rd World Cup held two years later, at the first round. As expected, Sweden led the way in the first half, taking a 2-0 lead at halftime, but Japan took advantage of their endurance to rally in the second half. After equalising the match with the goals scored by KAWAMOTO Taizo and UKON Tokutaro, MATSUNAGA Akira scored the game winner in the 85th minute to complete the come back for Japan. In the second round, Japan faced Italy, who was considered as the best team in the world. Led by the world-renowned coach Vittorio POZZO, Italy won the World Cup in 1934 and 1938, and the gold medal at the Berlin Olympics, in which they participated mainly with their young players. Despite limiting the damage to three goals until the 75th minute, Japan suffered a complete loss to Italy 0-8.

The 1940 Olympics was set to be held in Tokyo. The Japan National Team, who fought well against the world in Berlin, entered the World Cup for the first time in 1938, and if they could continue to develop at that rate, it was inevitable that Japan could become a force to be reckoned with at the Tokyo Olympics. However, due to the intensification of the Sino-Japanese War that began in 1937, Japan had to withdraw from the World Cup qualifiers and forfeit the rights to host the Olympics.

The war expanded further, and the Pacific War broke out in 1941. The development of football was stagnated, and many well-known football players such as Ukon and Matsunaga who scored goals against Sweden also became victims of the war.

After World War II ended in 1945, the All Japan Football Championship resumed in 1946, and in 1951, the Japan National Team participated in the inaugural Asian Games held in India and won the bronze medal. Then, the first ever match against Korea Republic took place at the qualifiers for the 1954 FIFA World Cup Switzerland™. Although the Japan National Team consisted of many players who were active before the war, it was the 23-year old NAGANUMA Ken who scored the only goal for Japan in the 1-5 defeat to Korea Republic, hinting that Japanese football was about to enter a new era.