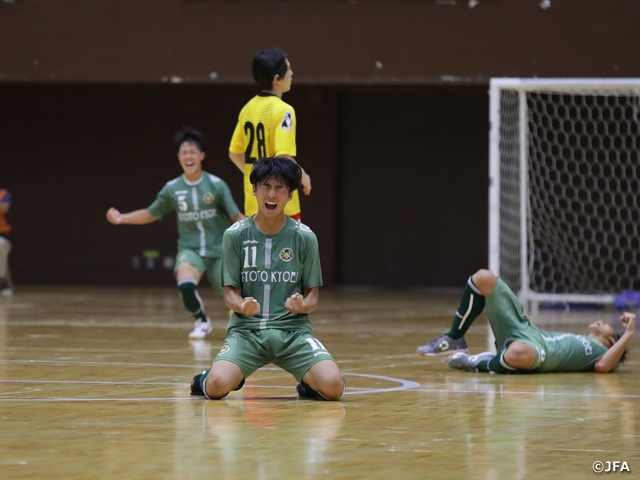 The JFA 8th U-18 Japan Futsal Championship came to an end on Sunday 1 August, as the third place match and final took place.

At the third place match, Estabom U-18 (Kansai1/Osaka), who have entered the tournament with just seven players on their roster, squared off against two time champions Teikyo Nagaoka High School (Hokushinetsu/Niigata). The opening goal came in the 19th minute, when Estabom U18 deployed a powerplay to convert a set-piece.

The second half saw Teikyo Nagaoka dominate the ball possession, but Estabom responded with the quick counterattacks initiated by JINKAWA Ryo and NAKASHIMA Keita, who were named into the shortlist of the U-20 Japan Futsal National Team. With the two sides exchanging four goals apiece in the second half, which includes the four goals scored by Teikyo Nagaoka’s YOSHIDA Sosuke, Estabom U18 walked away with a 5-4 victory to claim third place. 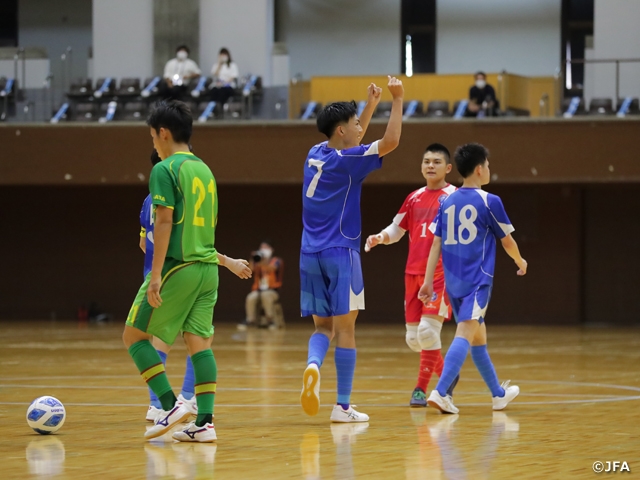 The final was a rematch between two teams who advanced through Group A, Bardral Urayasu Tercero (Kanto1/Chiba) and Kyoto Kyoei Gakuen High School (Host/Kyoto), which turned out to be an intense match that saw a total of 12 goals scored between the two sides.

Urayasu’s SHIBAYAMA Keigo, who was recently called up by the U-20 Japan Futsal National Team, started the action by scoring the opening goal in the first minute, as he shared his enthusiasm ahead of the match, “I was completely shut down by Gabriel in our first match, so I need to redeem myself.” Despite conceding the early lead, Kyoto Kyoei gradually picked up their pace to increase the ball possession, leading to the equaliser scored by MASUDA So in the 11th minute. 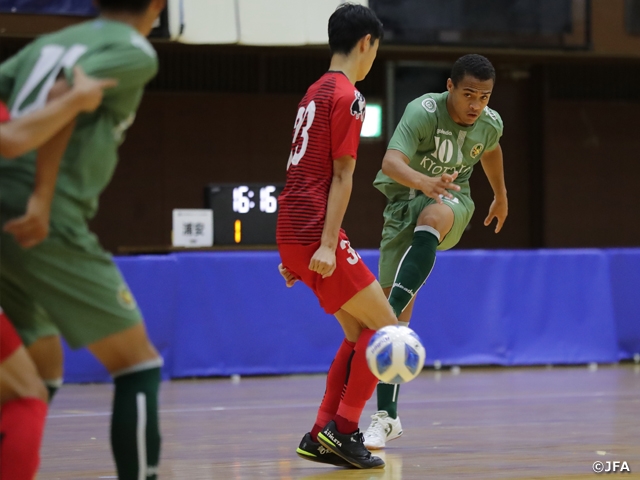 After seeing a rather subdued first half in which the two sides exchanged a goal apiece, the second half kicked off with Urawa retaking the lead with the goal of IZAWA Kei, followed by the equaliser scored by Kyoto Kyoei’s HIRAI Kentaro, within the first minute. In the 26th minute, Urawa claimed their third lead with the goal scored by SOTOBAYASHI Ryogo, but Kyoto Kyoei went onto a goal spree, scoring four unanswered goals within three minutes to take the lead for the first time in this match.

In efforts to rally back, Urawa deployed their powerplay, which allowed them to get back within a goal from levelling the match, but the Kyoto side managed to keep their composure to maintain their lead, as coach OISHI Masayasu later reflected, “I told them that it is the same as the keep-away drills we play in practice. We just need to deny them from taking shots, wait for them to make mistakes, and capitalise on the opportunities.” With time running out, Masuda scored the team’s seventh goal in the 39th minute to secure the win, as Kyoto Kyoei claimed the Japan Futsal Championship title in their first tournament appearance, also becoming the first host participant to win the title. 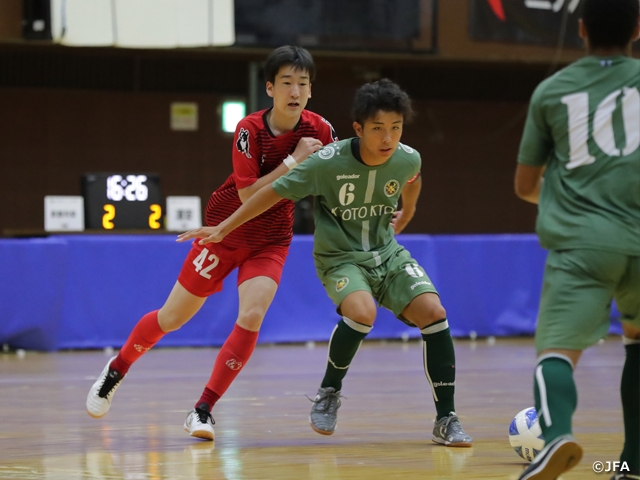 OISHI Masayasu, Coach (Kyoto Kyoei Gakuen High School)
I am delighted. When we faced Urawa in the very first group stage match, we were able to gain a clear vision of what a futsal team plays like. The fact that we lost to them in the first round gave us extra motivation for the final. The team showed great improvements over the tournament, as we focused on our defensive shape, work ethic, and set-pieces. We are proud to be able to win the title as the host participant. We also feel very fortunate to be given the opportunity to play in this tournament during the ongoing pandemic, and we are glad to be able to showcase our performance to all of our supporters.

FP Gabriel HENRIQUE (Kyoto Kyoei Gakuen High School)
I am overwhelmed right now. I have won two futsal tournaments while I was a junior high school student in Brazil. When I heard we were participating in a futsal tournament, I was very excited. The final was extremely tough because we were exhausted and facing a strong opponent. We will continue to work hard so that we can make the All Japan High School Soccer Tournament.

FP OBATA Yuto (Kyoto Kyoei Gakuen High School)
It still feels surreal. When it was determined that we were going to play in a futsal tournament, we set our goal to win the title. Futsal and football are different sports, but we were playing football when we lost our first match at the group stage. It was great that we were able to redeem ourselves at the final. With the tournament being held in Kyoto, many of the operating staffs were cheering for us, which gave us extra motivation to do well, so we are thankful for all the support we received at this tournament. I believe that the experience we gained on the futsal court will help us grow as a football team, so we will try to make the most of this experience to compete in the All Japan High School Soccer Tournament.

IBARAKI Shiro, Coach (Bardral Urayasu Tercero)
Although we lost the match, I think the players gave everything they’ve got. The players brought the jerseys of their teammates who were not able to attend the tournament for various reasons, and I could tell that they were playing on behalf of many of their friends and teammates. This was a tough loss for us, but I hope the players will make the most of this experience to reach the top team.

INADA KAzuo, Coach (Estabom U18)
I am happy that we were able to finish third, but I honestly thought we could do better. We must not sit on our laurels, because our goals are to play for the Japan Futsal National Team, reach the F.League, and thrive at foreign leagues. I hope the players will continue to strive for a higher level and work hard to achieve their goals.