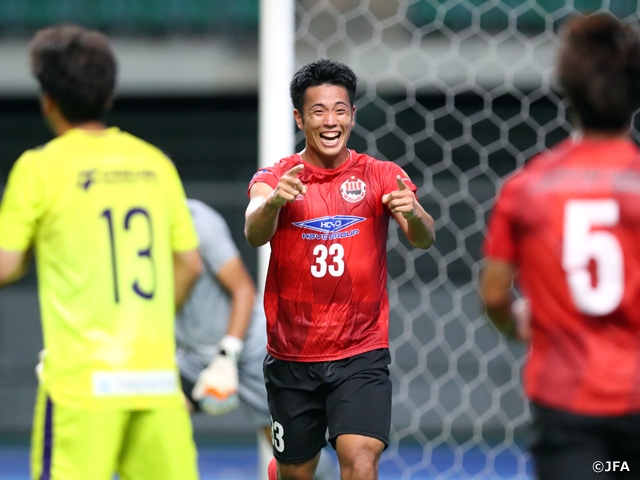 The third round of the Emperor's Cup JFA 101st Japan Football Championship took place on Wednesday 7 July, as 12 fixtures were played nationwide. At Showa Denko Dome Oita, JFL champions Verspah Oita (Amateur seed) faced Ococias Kyoto AC (Kyoto) who was coming off a 5-1 victory over Sanfrecce Hiroshima (J1) in the second round.

The match started out with Kyoto applying aggressive pressure from the frontline, while Oita connecting short passes from the defence line and initiating their offence by utilising the open spaces in the flanks. It was Oita who took the initiative and created opportunities in the early minutes, as coach YAMAHASHI Takashi later reflected, “We were able to execute our game plan and showcase the style we were striving for.” Oita scored the opening goal in the 24th minute when MAEDA Hiroki converted a corner-kick with a header. Maeda went onto score his second goal in the 27th minute, this time capitalising on a cross sent by HONDA Takuto to give Oita a 2-0 lead at halftime.

With their backs against the wall, Kyoto increased their intensity level to start the second half, applying more pressure from the frontline. After conceding another goal to Oita in the 59th minute, Kyoto’s IBRAHIM scored a goal in the 62nd minute from a counterattack. Despite the loss, this match provided a great learning experience for Kyoto, who are striving to enter the JFL, as coach TAKIHARA Naoaki commented after the match, “We had what it takes to compete, but couldn’t showcase our full potential for the entire 90 minutes.” 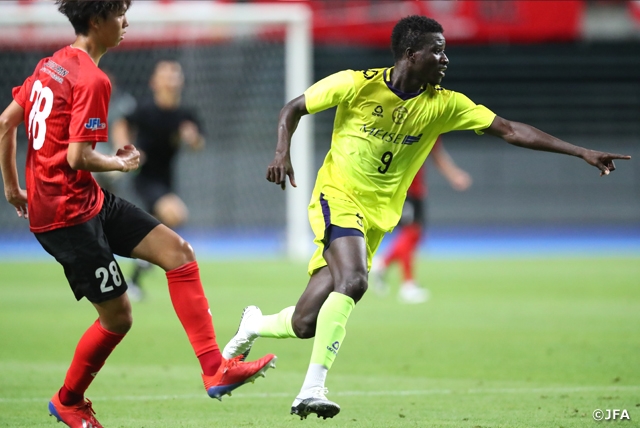 Oita on the other hand, rotated players to preserve their energy after taking the two goal lead, successfully managing their way to a comfortable 3-1 victory. The Oita side have now reached the fourth round in back to back Emperor's Cup. 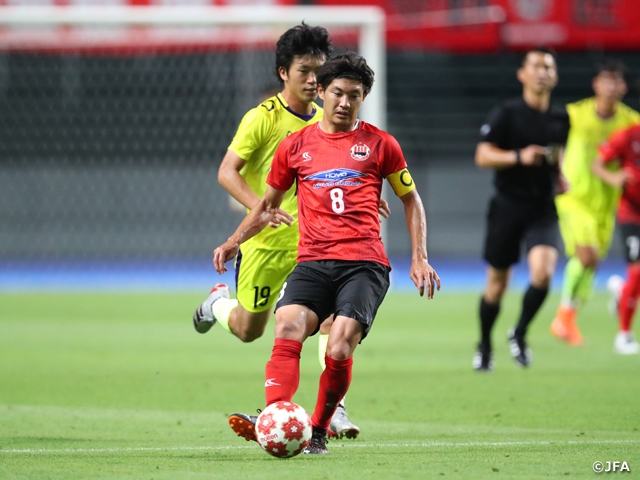 TAKIHARA Naoaki, Coach (Ococias Kyoto AC)
We were not able to execute our game plan in the early minutes, which forced us to be in the defensive end for a long stint. Our pressure was ineffective and allowed our opponent to utilise the width of the field. We also conceded goals from set pieces, which gave momentum to our opponent. We manged to make adjustments in the second half and initiate our attacks from counterattacks. For a team who is striving to reach the JFL, this match against last season’s JFL champions was a great learning experience.

SHIMIZU Ryohei (Ococias Kyoto AC)
The pressure we applied from the frontline were ineffective, and our opponent was able to use the open space freely in the early minutes of the match. It felt like our opponent was executing the football style we were striving for. However, this match has given us a great learning experience. In order for us to reach the next level, we must first win the Kansai league, so that will be our main focus for now. The fact that we reached the third round by beating a J1 club has allowed us to gain recognition from many people, so that was something positive we can take home from this competition.

YAMAHASHI Takashi, Coach (Verspah Oita)
We were the challengers in the first two rounds, as we faced clubs from J2, but this time we faced a team from a lower category. I told my players to stay aggressive and give their best efforts to showcase our usual football style, which is exactly what our team did from the beginning of the match. However, we failed to capitalise on our big chance to score the fourth goal and ended up conceding a goal from a counterattack to make it 3-1. Although we lost our composure towards the end, the players who entered as substitutes understood their roles and did a fine job to maintain our lead.

MAEDA Hiroki (Verspah Oita)
With this cup match being scheduled four days following our league match, players who weren’t getting as many minutes in the league were given the opportunity to start in the match. That is why I entered this match with the intention to make a case for myself. Both of my goals came from a great assist, so I was just focused on hitting the target. We will now face Jubilo Iwata, who is a superior opponent. We have nothing to lose, so we will try to leave everything on the pitch and enjoy the experience.