The group stage fixtures of the AFC Champions League (ACL) 2021 East region took place at Uzbekistan and Thailand. In Group H, Gamba Osaka squared off against K.League champions Jeonbuk Hyundai Motors FC (Korea Republic) on Monday 28 June at Tashkent, where they drew 2-2 thanks to the brace scored by PATRIC.

Gamba Osaka, who is taking part in their 10th ACL, faced Jeonbuk for the third time. The two clubs faced each other at the quarterfinals in the 2015 ACL, where Gamba won the two-legged fixture with a win and a draw. However, the Osaka side have struggled against Korean clubs in their most recent ACLs, as they have lost to Suwon Samsung Bluewings in 2016 and Jeju United FC in 2017.

Following their 2-0 victory over Tampines Rovers FC (Singapore) on the 25th, Gamba rotated two players and reverted their system back to a three-back formation for this match against Jeonbuk. However, it only took two minutes for Jeonbuk to score the opening goal, as Stanislav ILJUTCENKO responded to the long feed delivered by the GK to put the Korean side ahead.

In efforts to level the match, Gamba constructed their offence by utilising both the depth and width of the field, as IDEGUCHI Yosuke orchestrated the midfield while YAJIMA Shinya made runs to threaten the opposing goal, but it was Jeonbuk who scored the next goal.

In the 17th minute, KUNIMOTO Takahiro responded to a deflection caused by a shot taken by Iljutcenko and fired a left footed shot into the Gamba goal.

With the team down by two goals, the Gamba offence started to rally, as more chances were being created down the left flank. In the 27th minute, FUJIHARU Hiroki delivered a cross from the left side, allowing Patric to score with a header to cut their deficit in half.

Four minutes later, Gamba utilised the width of the field to score the equaliser, as the cross sent by USAMI Takashi from the left flank was redirected back into the mix by Yajima, allowing Patric to convert the cut-back. The Brazilian striker has now scored in back to back matches, marking his third goal at the competition.

Gamba continued to press forward but was forced to sub-out Fujiharu in the early minutes of the second half due to injury. The Osaka side introduced Leandro PEREIRA and KURATA Shu mid-way into the second half to add layer to the offence, as they combined with Usami and ONOSE Kosuke to create opportunities but fell short from scoring the go-ahead goal.

Jeonbuk also brought in GUSTAVO in the second half, as the Brazilian attacker collaborated with Iljutcenko to threaten the Gamba goal. In the 65th minute, Iljutcenko responded to a long delivery to drop the ball to Gustavo who struck a right footed shot. Gustavo came close in another opportunity created at the end of the match, as he struck a header off a cross, but his attempt was blocked by a superb save made by HIGASHIGUCHI Masaaki.

With both sides falling short from finding the back of the net, the match ended in a 2-2 draw. As a result, the two sides are tied with four points apiece, with Gamba having the advantage in goal difference.

Gamba’s captain MIURA Genta reflected after the match where they conceded two goals in the early minutes, “It was very disappointing, but it gave us the fire to fight back.” The veteran defender continued to mention, “We need to improve how we enter the match. A scoreless first half will give our team a huge advantage for the rest of the match.”

On this day, Chiangrai United (Thailand) defeated Tampines 1-0 in the other group match. Gamba Osaka will now face Chiangrai on 1 July.

Nagoya win three in a row with Yamasaki’s Hat-trick

In Group G, Nagoya Grampus faced Ratchaburi FC (Thailand) at Bangkok on the 28th, where YAMASAKI Ryogo recorded a hat-trick in the first half to propel the team to a 4-0 victory. Nagoya have now won three consecutive matches to keep the group lead.

Despite the torrential rain that started to pour during the first half, Nagoya showed great aggressiveness from the early minutes. The opening goal came in the 26th minute when Yamasaki converted the cross of MATEUS to give Nagoya the lead. Just five minutes later, Yamasaki responded to a delivery sent by YOSHIDA Yutaka to extend the lead, before capitalising on a deflection caused by the shot taken by MAEDA Naoki to complete his hat-trick before the break.

While Ratchaburi anticipated for their opportunities to counter, Nagoya continued to showcase their dominance in the second half, as SAITO Manabu scored the team’s fourth goal in the 69th minute. Although Maeda, KAKITANI Yoichiro, and MORISHITA Ryoya created chances in the closing minutes, the match ended with a final score of 4-0.

After the match Yamasaki commented, “It was tough playing under this harsh weather.” But continued to add, “Our defenders did a great job keeping a clean sheet, so I am glad I was able to contribute by scoring goals.”

In the other fixture played in Group G, FC Pohang Steelers (Korea Republic) defeated Johor Darul Ta'zim (Malaysia) 4-1, as the Korean side moved up to second place with their second win. 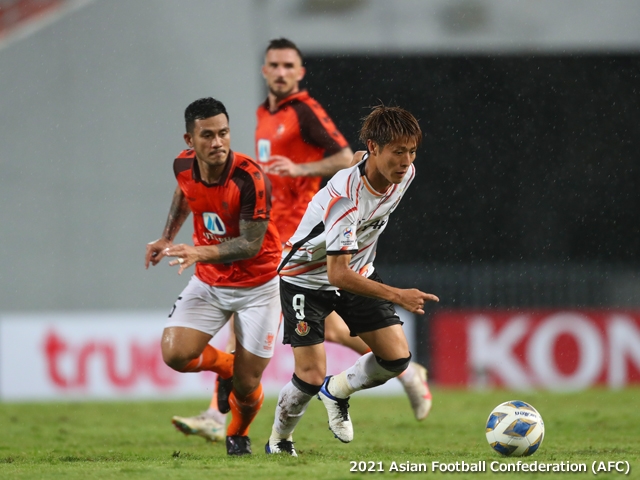 Cerezo come from behind to win back-to-back matches

Cerezo Osaka played their second match in Group J, as they faced Kitchee SC (Hong Kong) at Buriram on the 27th. Despite conceding the opening goal, Cerezo clinched their second straight victory with the goals scored by Adam TAGGART and TIAGO in the second half.

In a match played under a hot and humid weather, Cerezo struggled to create opportunities against Kitchee who showed tenacious efforts in defence, as they dropped deep in their territory while anticipating for their chance to counter. The tactic taken by the Hong Kongese side came to fruition when Dejan DAMJANOVIC converted the cross sent by CLEITON to take the lead.

It wasn’t until the 69th minute that Cerezo managed to equalise the match, as Taggart capitalised on a deflection caused by the cross sent by SAKAMOTO Tatsuhiro from the right side. With momentum on their side, Cerezo took the lead just two minutes later, when Tiago struck a shot from mid-range that pierced the net of the Kitchee goal, giving the Osaka side the long awaited lead.

After scoring a goal in back to back matches, the Brazilian striker commented, “With our opponent dropping deep in their territory, this was a very tough match for us, and I knew I had to take my chances from distance.” Cerezo’s coach Levir CULPI also reflected on the match, “Our players never gave up and showcased a brave fight with great courage and power.”

Cerezo Osaka will now face Port FC (Thailand) on the 30th, who won against Guangzhou FC (China PR) 3-0 on this day, as the Thai side is tied for second place with Kitchee. 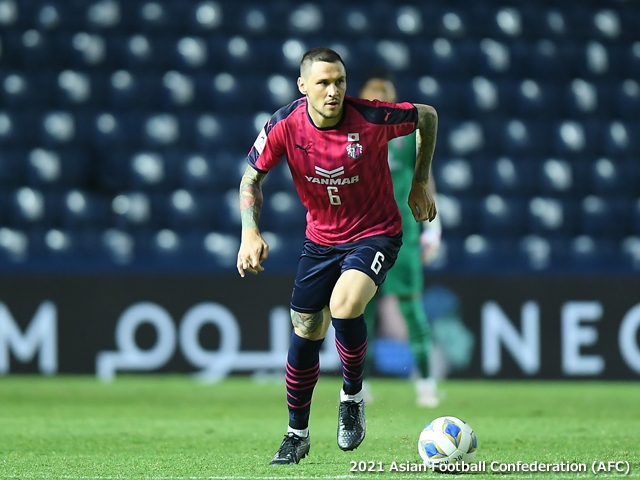 In Group I, Kawasaki Frontale won 7-0 against Beijing FC (China PR) at Tashkent on the 29th. Six players scored a goal in this match, including CHINEN Kei who marked a brace, to keep the J.League champions at top of their group.

Following their 3-2 victory over Daegu FC (Korea Republic) in the first match, Kawasaki rotated six players in this match. The club effectively utilised the width of the pitch, as HASEGAWA Tatsuya scored the opening goal in the seventh minute, which was followed by TACHIBANADA Kento in the eighth minute to give Kawasaki a 2-0 lead within the early minutes of the match.

Beijing entered this match consisting of mainly their young players after members of the China PR National Team who participated in the FIFA World Cup Asian qualifiers earlier this month were under quarantine as a measure to prevent the spread of COVID-19. Led by LI Boxi, the young Beijing side showed great aggressiveness and speed in the early minutes of the match, but after conceding two goals, the team gradually dropped back to their territory, allowing Kawasaki to take full control over the match.

Despite seeing KOBAYASHI Yu side-lined with an injury during the first half, Kawasaki continued to add to their tally, as TONO Daiya extended the lead to three goals before the break. Chinen converted the PK earned by Tachibanada at the start of the second half, followed by the goal scored by YAMAMURA Kazuya in the 51st minute. WAKIZAKA Yasuto scored with a shot taken from mid-range in the 56th minute, before Chinen scored his second goal of the match in the 59th minute to make it 7-0. Kawasaki showcased their dominance over the Chinese club, recording 33 shots while keeping the opponent to just two shots.

Following the match, Wakizaka reflected on their performance, “We conceded early in our previous match, so we entered today’s match with the intention to score the opening goal. It was great to see our side gain momentum and dominate the match after scoring the opener.” Reflecting on the fact that six different players registered a goal in this match, the Japanese midfielder mentioned, “We are striving to become a team that can create threats from every position, so this was a good result for us.”

Kawasaki Frontale will now face United City FC (Philippines) on 2 July. The Filipino side lost 0-7 to Daegu on this day, as they are in fourth place after losing both of their matches played thus far. 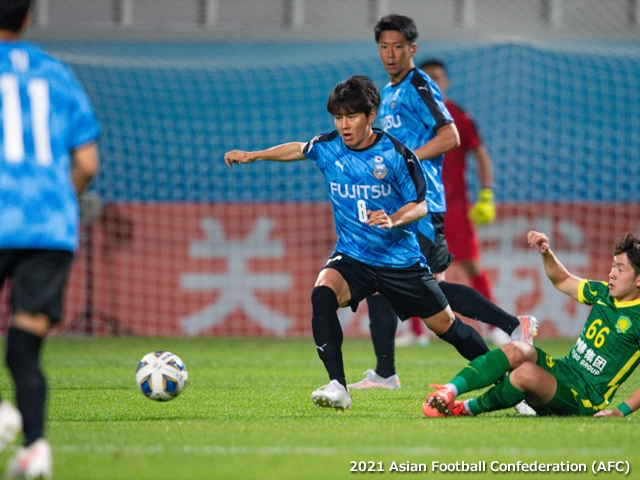 MATSUNAMI Masanobu, Coach (Gamba Osaka)
We feel like we were able to showcase a very strong performance against the Korean champions. Despite conceding the first two goals, we managed to execute our football to extract a valuable point out of this match. Our opponent exploited us by sending simple long balls into the open space, which led to the opening goal. We were not clear on our approach and positioning towards the loose balls, so we need to be more detailed oriented in those situations. Although we managed to come from behind to tie the match, we failed to capitalise on a few opportunities in the second half, so that is another aspect we must improve on.

DF FUJIHARU Hiroki (Gamba Osaka)
We were overwhelmed by our opponent at the beginning and conceded two goals, but we managed to keep our composure to keep the ball moving. The fact that we were able to score back early helped us gain a positive vibe, which led to the second goal. (Reflecting on the first goal) I saw Patric open, so I made the decision to send the cross with my first touch. It went just as I anticipated. It was great to see our side come from behind to earn a point, but we had plenty of chances to take the lead, so we need to raise the quality of our plays at the final third.