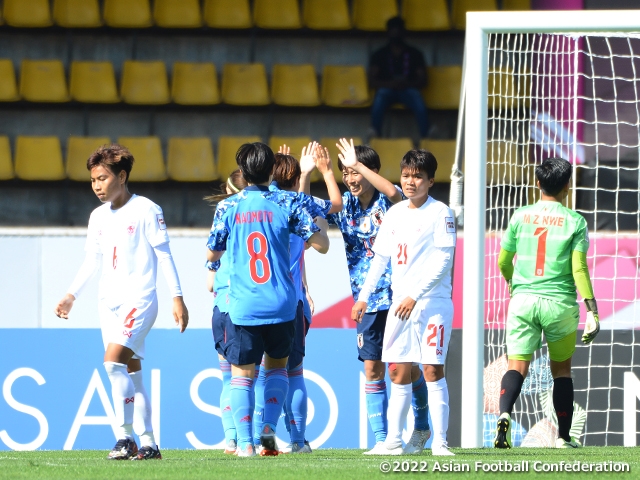 The starting line-up included players who had competed in the Tokyo Olympics, such as KUMAGAI Saki (FC Bayern Munich) and TANAKA Mina (INAC Kobe Leonessa), as well as fresh faces who were making their first appearance in the Women's Asian Cup, such as NAGANO Fuka (Mynavi Sendai Ladies) and HAYASHI Honoka (AIK Fotboll). 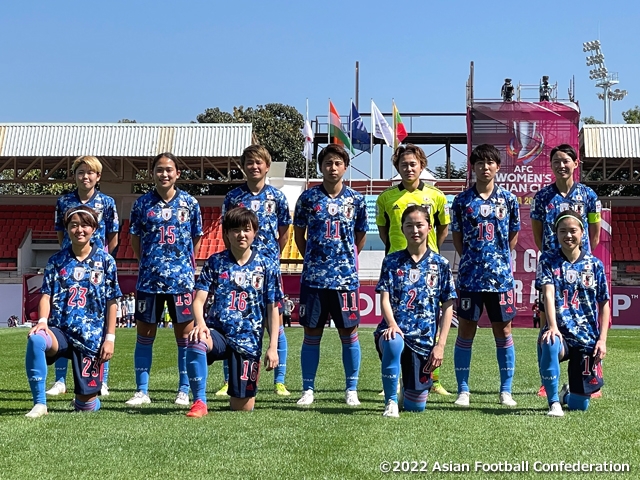 The match started with Japan taking the initiative, as the header fired by Tanaka struck the crossbar in the fourth minute. With Japan dominating the ball possession, the opening goal came in the 22nd minute, when the ball was connected from the goalkeeper YAMASHITA Ayaka (INAC Kobe Leonessa) to HASEGAWA Yui (West Ham United), who assisted the goal of UEKI Riko (Nippon TV Tokyo Verdy Beleza), who scored her first international goal, which was also the team’s first goal under the new regime of coach IKEDA Futoshi.

Despite their dominance, Japan struggled to score their second goal, and with Hayashi picking up an injury, NAOMOTO Hikaru (Mitsubishi Heavy Industries Urawa Reds Ladies) was introduced to the match in the 43rd minute.

After failing to extend their lead in the first half, Japan started the second half with a goal rush. At the beginning of the second half, Hasegawa responded to the pass of Ueki to make it 2-0, followed by Naomoto, who scored her first international goal by converting a free kick in the 52nd minute, which extended the lead to three goals.

With momentum on their side, Japan introduced NARUMIYA Yui (INAC Kobe Leonessa) and SUGASAWA Yuika (Mitsubishi Heavy Industries Urawa Reds Ladies) in the 69th minute, and just a minute later, Narumiya registered her first international goal with the assist coming from Sugasawa.

Hasegawa, who scored her second goal of the match during additional time, was named as the player of the match with her involvement in three goals. 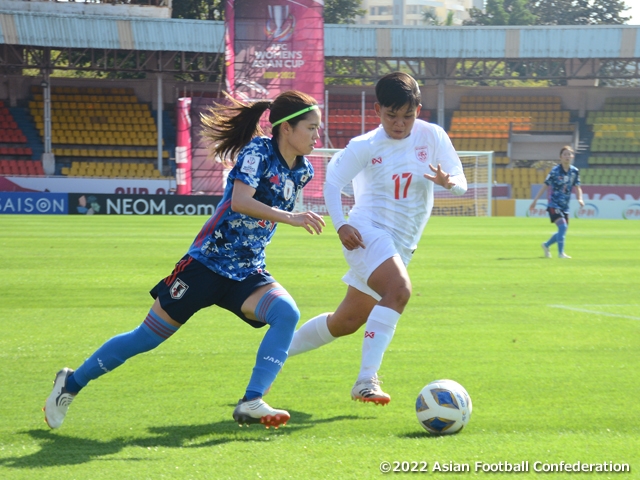 Japan showed a high level of concentration to keep their opposition to zero shots in 90 minutes, while scoring five goals, including three players scoring their first international goals, to earn their first victory under coach Ikeda. With this win, the team has made a good start to qualify for the FIFA Women's World Cup Australia & New Zealand 2023™ and to win the AFC Women's Asian Cup for the third time in a row.

The Nadeshiko Japan will now prepare themselves for their second group stage match against the Vietnam Women’s National Team, which will take place on Monday 24 January.