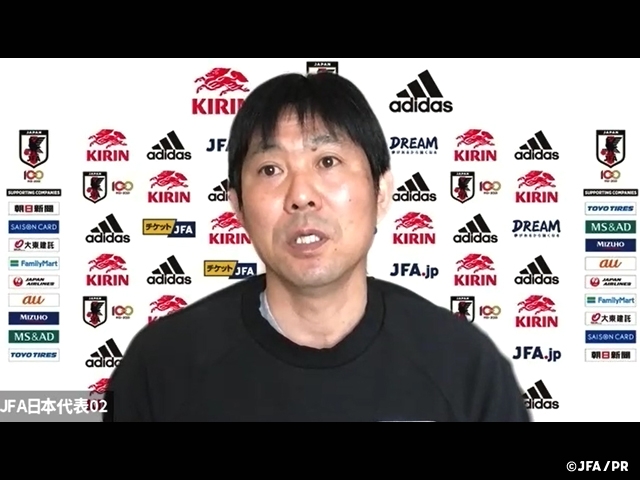 On Wednesday 2 June, coach MORIYASU Hajime of the SAMURAI BLUE (Japan National Team) appeared in a press-conference and shared his aspiration ahead of their match against the U-24 Japan National Team at Sapporo Dome, “I want my players to strive for victory and showcase their full potential for the team.”

The team was originally scheduled to face the Jamaica National Team at the KIRIN CHALLENGE CUP 2021, but because some of the players from the Jamaican side were not able to travel, the match was cancelled and rearranged to the current fixture against the U-24 Japan National Team. In addition, charity events to support the medical workers will be held for this match.

Following their win over the Myanmar National Team on 28 May, the SAMURAI BLUE has clinched the final round of the FIFA World Cup Qatar 2022™ Asian qualifiers. With their next match being scheduled during the international match window set by FIFA, players belonging to clubs in the J.League has joined the team, while players selected into the U-24 Japan National Team left the squad, including the three players selected as the “Over-age (OA)” players, YOSHIDA Maya (U.C. Sampdoria), SAKAI Hiroki (Olympique de Marseille), and ENDO Wataru (VfB Stuttgart).

This match will provide the team with a precious opportunity to prepare themselves ahead of the remaining two fixtures in the second round (7 June vs Tajikistan and 15 June vs Kyrgyz Republic), as well as the final round of the Asian qualifiers. For the U-24 Japan National Team, this will be their first match with the OA players.

The coach also shared his expectation towards the U-24 Japan National Team, “I want them to be hungry and showcase their determination to win this match.” He continued by making a comment for the SAMURAI BLUE, “I want them to showcase their full potential and focus on improving their value at both the team and individual level.”

The Japan National Team has played in matches against club teams during the 80s, as they drew against Yamaha Motor Company (current Jubilo Iwata) 0-0 in 1983 and lost to Yomiuri Club (current Tokyo Verdy) 0-1 in 1985, but it is extremely rare for them to face a national team from an under-age category.

The players seemed to be highly motivated for this match, as MINAMINO Takumi (Southampton FC) commented, “We will play to win the match. This will be an intense match.” While ASANO Takuma (FA) mentioned, “This is a match we cannot afford to lose. We must not underestimate our opponent and play with a sense of urgency.” 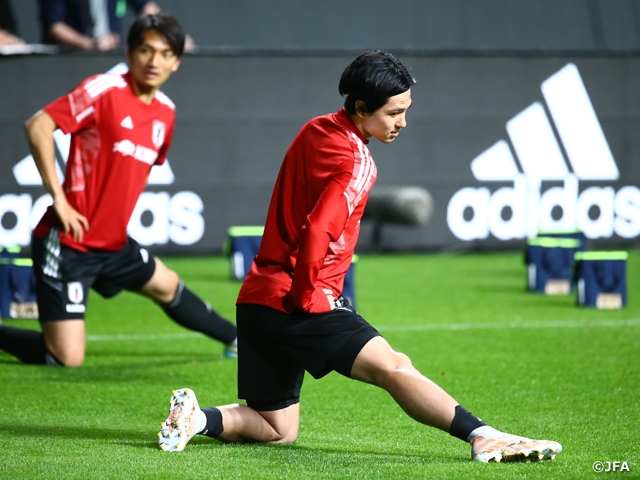 On this day, the SAMURAI BLUE held a training session behind closed doors where they trained for an hour and a half to go over their tactics.

Coach YOKOUCHI Akinobu, who will be leading the U-24 Japan National Team for this match, welcomed the challenge, “We are given the opportunity to face the senior squad in an intense atmosphere.”

The coach demanded his players to test their abilities against the senior squad and to challenge themselves on the pitch. Regarding the three OA players, he shared his expectation, “They are much more experienced than the other players, so I hope they can utilise their experience to help the team reach a higher level.”

Jersey numbers for this match has been determined. TANIGUCHI Shogo (Kawasaki Frontale) and SHOJI Gen (Gamba Osaka), who are making their return to the national team, were given #6 and #4 respectively, while SAKAMOTO Tatsuhiro (Cerezo Osaka), who was named into the squad for the first time, was given #17. OSAKO Yuya (Werder Bremen) was named as the team captain for this match. 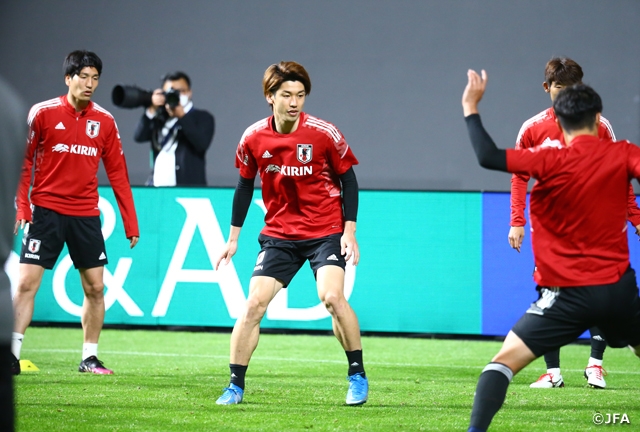 The three players who are joining the U-24 Japan National Team as OA players, Yoshida, Sakai, and Endo were given #22, #19, and #6 respectively, while DOAN Ritsu (DSC Arminia Bielefeld) will be wearing #10 with KUBO Takefusa (Getafe CF) wearing #11.

The match will be held behind closed doors, but a charity event will take place during the match using the online fundraising service “Kassai.” The money collected through this event will be donated towards the activities held to support the medical workers who are fighting against COVID-19 on the frontline.

MORIYASU Hajime, Coach of SAMURAI BLUE (Japan National Team)
The senior squad is in a position where they cannot afford to lose, but they are used to playing under such pressure. Doing well at the Olympics is the current goal for the players on the U-24 side but reaching the senior squad must be their next goal. That is why I want them to be hungry and showcase their determination to win this match. As for the players on the senior squad, I want them to showcase their full potential and focus on improving their value at both the team and individual level. We have been working as “One team with two categories” all along, so the teams should be facing the same direction. I am looking forward for a heated battle that can inspire each other, but I don’t want to see our players hurting each other, so I am hoping to see an intense and clean fight from the two sides.

We have added new players to the squad since our match against Myanmar, and we have four matches to work with before entering the final qualification round. Although we will be giving up some of our core players to the U-24 squad, this will open up the opportunity for other players to gain experience and allow us to raise the overall level of the team.

We feel sorry for the staffs and players of the U-24 Japan National Team (for the sudden schedule change), but coach Yokouchi and I both feel that this match has a great upside. We are able to carry out our activities with the support of many people. We hope to use this match as an opportunity to give back to all those people.

In September 2018, we were scheduled to face the Chile National Team in KIRIN CHALLENGE CUP 2018 at Sapporo, but the match was cancelled after the area was struck by the Hokkaido Eastern Iburi Earthquake. Despite facing a natural disaster which caused a power outage in the affected area, our team was able to carry on with our daily routines and even conduct training sessions with the support of the hotel staffs, Hokkaido FA, and many other people. Ever since, we had been waiting for the opportunity to express our gratitude and give back to the city of Sapporo. We would like to express our sincere condolences for the victims and those who were affected by the earthquake.

This time, we are given the opportunity to play matches during an ongoing pandemic. We hope to make social contribution through football and through this activity. Many people have been affected by the pandemic, including the medical workers who are fighting the infection on the frontline. We hope to raise the awareness and deliver the donations to those who are in need. Also, as the Japan National Team, we will give our best efforts to deliver a performance that can give energy and courage to those who are affected by the pandemic and other natural disasters.

DF #5 NAGATOMO Yuto (Olympique de Marseille)
Although they are labelled as the “U-24” Japan National Team, they consist many of the Japan National Team players, so this will be an intense battle between two Japan National Teams. It is scary enough facing Doan and Kubo, but I am sure other players are also seeking for their opportunity to make a case for themselves. There is also competition within the team, so I hope to earn my starting position and showcase a strong performance on the pitch. I feel like I am in great condition right now, and I have been feeling confident since our previous match. I am always anticipating to get myself involved in our team’s goals and I was targeting Osako because he has been playing incredibly. The Japan National Team is not a place to develop young talents, and the best players should always be on the pitch. Winning a starting position at the Japan National Team is one of my current goals, but I am also anticipating to share my experience, mentality, and technique to the younger generations, on and off the pitch. 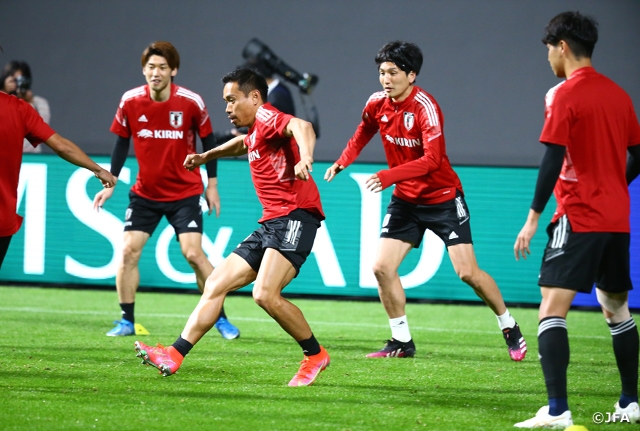 MF #10 MINAMINO Takumi (Southampton FC)
First of all, I am very excited for this match. This is a rare opportunity, and I am sure the players on the U-24 squad will enter the match fully motivated. This is a match we cannot afford to lose, so we will give our utmost efforts to win the match. We need to demonstrate what it takes to be in the highest level of Japanese football. I am sure this will be an intense match, so we hope no one gets injured. With the three OA players joining their side, we are fully aware of each other’s strengths and weaknesses, which has its upside and downside. The U-24 side will be playing with the OA players for the first time, so I feel like we have the advantage, but this will also be our first match since adding the players from the J.League, so I presume both sides will be testing the water in the early minutes. We only have four matches until the final round of the Asian qualifiers. In our last match, we were able to deepen our understanding on the team concept and managed to keep good distance between each other in offence, while keeping our defence compact. Now that we have added new players, we must try to keep ourselves on the same page and heighten the quality of our plays.

FW #15 OSAKO Yuya (Werder Bremen)
This match feels a bit weird. It is not a training session nor a training match. It is actually pretty interesting. I usually don’t get to face Yoshida and Tomiyasu in our training sessions, so personally, I am very excited to see how it will turn out. Sakai is good at keeping a close distance with the opposing attacker, which is very common among centre halves and fullbacks who plays for clubs overseas. I won’t be doing anything special, as I will just try to showcase my usual performance. With that being said, the senior team must win this match. I don’t feel like I need to do anything special as a captain. Most of the players already know what they have to do, so I am just going to lead by example. We are aware that we are way behind the World’s top tier. I personally have to raise the quality of my plays at the final third, and it is important that each player is striving to reach a higher level.

FW #18 ASANO Takuma (FA)
The U-24 squad consists of many players who are playing abroad, so I am looking forward for this match. Once I am on the pitch, I will focus on winning each battle in front of me. It is important that we all give our best efforts without getting injured in this match. My strength lies on the ability to penetrate the space behind the opposing defence line, and I feel like that is our opponent’s weakness, so I hope to exploit the open space to score goals. I will also make runs to allow my teammates to score goals as well. I was used as a late substitute to play in the right flank in our previous match, and even though I was not used to playing in the flank, I was able to create chances, so I hope to build on that result to earn more minutes on the pitch. I will give my best effort to improve myself in the next four matches. 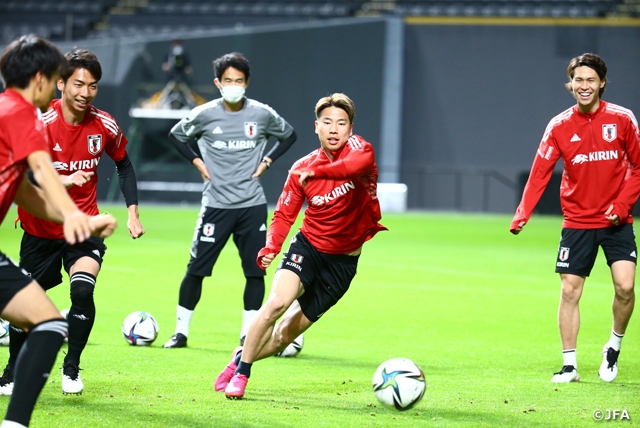