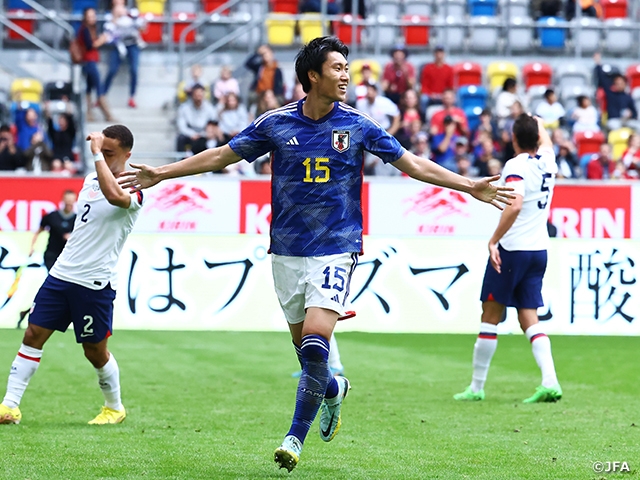 On Friday 23 September, the SAMURAI BLUE (Japan National Team), who are currently on a tour in Germany, played their first match of the KIRIN CHALLENGE CUP 2022 against the USA National Team in Dusseldorf, where they earned a 2-0 victory with goals from KAMADA Daichi (Eintracht Frankfurt) and MITOMA Kaoru (Brighton & Hove Albion FC).

Japan had a productive match, both offensively and defensively, against the USA, who will also compete in the FIFA World Cup Qatar 2022™ in November.

Head Coach MORIYASU Hajime opted for a 4-2-3-1 formation for this match, a system used in many of his previous matches, instead of the 4-3-3 that had been used since the middle of the AFC Asian Qualifiers (Road to Qatar). MAEDA Daizen (Celtic FC) was given the start in the striker position with Kamada just beneath him. KUBO Takefusa (Real Sociedad) and ITO Junya (Stade de Reims) were placed in the flanks with MORITA Hidemasa (Sporting CP) and ENDO Wataru (VfB Stuttgart) anchoring the midfield. SAKAI Hiroki (Urawa Red Diamonds) made his return to the defence line alongside TOMIYASU Takehiro (Arsenal), YOSHIDA Maya (FC Schalke 04) and NAKAYAMA Yuta (Huddersfield Town AFC). GONDA Shuichi (Shimizu S-Pulse) was given the start in goal. 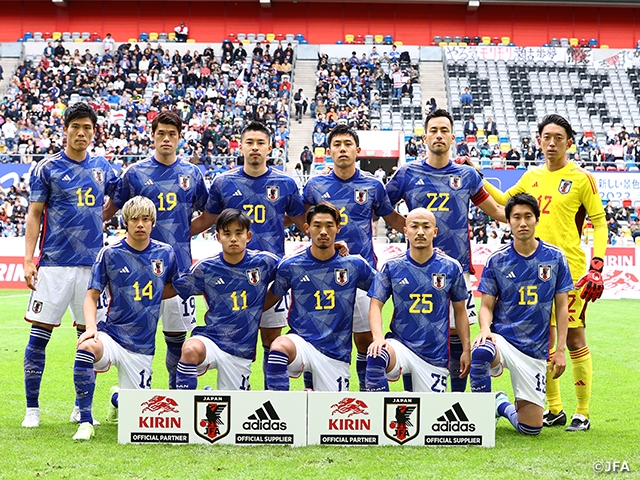 The Japanese players showed the same good form they had been showing at their respective clubs, as Maeda applied aggressive pressure from the frontline to set the tone, creating opportunities for the midfielders to win the ball and initiate short counters.

In the 10th minute, Kamada responded to a pass from Kubo to take a shot just inside the box, but his attempt was saved by the US goalkeeper Matt TURNER. Moments later, Maeda responded to an early cross delivered by Sakai but couldn’t quite connect with the ball.

After taking the initiative through their quick attacks, Japan scored the opening goal in the 25th minute, when Morita picked out Kamada unmarked inside the box, allowing the Eintracht Frankfurt striker to slot the ball into the far corner of the US goal. Although this play was initially called offside, the ruling was overturned by VAR to give Japan the lead. 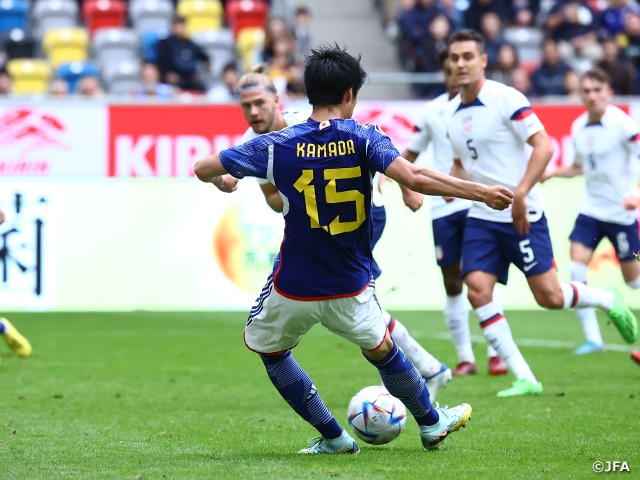 Kubo made an attempt from a free kick in the 33rd minute, but his shot was blocked by the goalkeeper.

The USA, who will face Wales, England and Iran in the World Cup, started the first half by utilising the width of the field, with right-back Sergino DEST attacking the flank to deliver a great cross to Jesus FERREIRA, who nearly capitalised with a header. Immediately after Japan's first goal, the USA earned a corner kick from a move down the left side, but Gonda was there to make the save to deny any threats from the set piece.

With a 1-0 lead, Japan introduced ITO Hiroki (VfB Stuttgart) to start the second half in the centre-back position, shifting Tomiyasu to the right side. MACHINO Shuto (Shonan Bellmare) and SCHMIDT Daniel (Sint-Truidense VV) were also brought in to replace Maeda and Gonda respectively.

In efforts to change the dynamics of the game, the USA also made four substitutions to shift their system from a four-back to a three-back formation.

Despite the changes to their opponent’s formation, Japan gradually made the adjustments to control the game. Kamada came close to scoring another goal in the 65th minute, when he drove inside the box after receiving a pass from Kubo, but his attempt was denied by a superb save made by Turner.

Mitoma and DOAN Ritsu (SC Freiburg) were introduced to replace Kubo and Ito in the 68th minute, and it didn’t take long until the two attackers got involved in the Japanese attacks.

In the 76th minute, Nakayama picked out Doan who made an attempt from the edge of the box, but his left footed shot sailed over the cross bar. Moments later, Mitoma combined with Nakayama to break down the left side to setup Kamada’s shot.

A close opportunity was created by the USA in the 80th minute, when Brenden AARONSON received the ball just outside the penalty area and struck a right footed shot that nearly captured the upper corner of the Japanese goal.

Veteran midfielder HARAGUCHI Genki (1.FC Union Berlin) was brought on to replace Kamada in the 86th minute, shifting the defence line to a three-back to close out the match.

In the 88th minute, Mitoma showcased a spectacular individual effort to drive into the box before curling a right footed shot into the far corner. As a result, Japan finished their first of two international friendlies in Germany with a 2-0 victory. 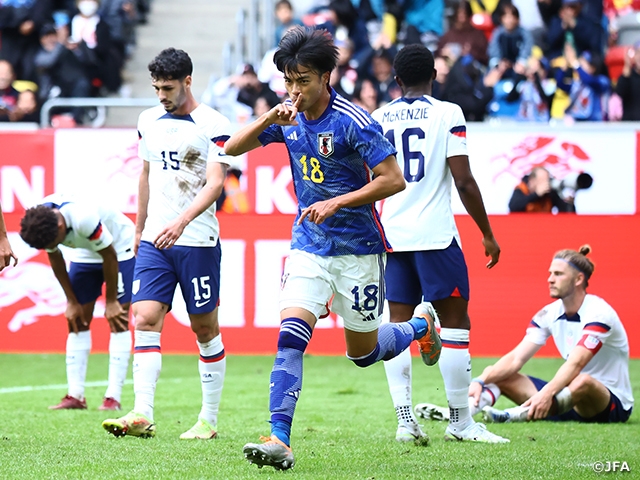 The SAMURAI BLUE will now face Ecuador at the same venue, Dusseldorf Arena, on Tuesday 27.

MORIYASU Hajime, Head Coach of SAMURAI BLUE (Japan National Team)
We used Endo, Morita and Kamada in the 4-2-3-1 system to see how we could bring out the best of each individual player, and I feel like we were able to do just that. They did well to switch positions with Kubo and Ito on the flanks depending on the situation and became the starting point of our attacks. They also contributed to the team's victory with their dedication in defence. As a team, I think the players made good decisions on where to challenge the ball, which allowed us to win the ball on many occasions, but I think we still need to work on the details to improve ourselves both defensively and offensively. Maeda made good use of his speed to chase the ball up front, and played a good role as a switch, making it easier for other players to link up with him and win the ball.

In the second half, we played Tomiyasu at right-back, with the aim of widening the team’s option and exploring different possibilities. Our decision to shift our system to a three-back formation at the end was also an option to close out the match. When our opponents changed their system to a three-back formation in the second half, we fell behind a little, so we have to be able to react quicker. We waited to make changes because we wanted to see how our players react in an actual game situation, and they did well to make the adjustments on the pitch.

If our opponents had capitalised on the opportunity they created from a cross in the first half, this match could have ended a lot differently. We need to be more dominant to reduce the risks as much as possible and strive to raise the overall quality of the team ahead of our next match and the World Cup.

DF #16 TOMIYASU Takehiro (Arsenal/England)
I started playing as a right-back in the middle of the match, but I was prepared for it because I was told ahead of time. I have been playing that position with my club, but it’s not exactly the same role as the national team, so I am still exploring the position. Whether at centre-back or side-back, I am just focused on contributing to the team’s victory. Although we were able to keep a clean sheet, there were times in the second half when we were a little out of sync, and I think we can still improve. To a certain extent, I think we are gradually getting a better idea of how we want to play as a team, but we still need to make better decisions. We have plenty of quality players up front, so I will focus on getting my job done in defence. 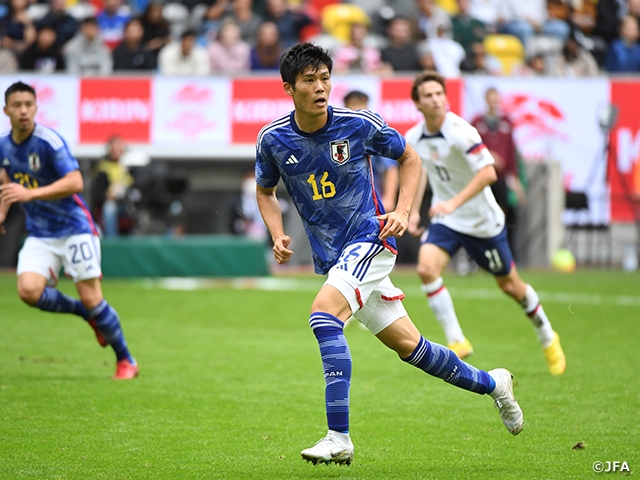 DF #22 YOSHIDA Maya (FC Schalke 04/Germany)
It’s great that we were able to win the match, but how we win is more important at this stage. There were a lot of things we were able to do today. However, we need to clarify why we were able to do it, so that we can execute the plays with the same quality in a regular basis. It is when we are winning that we need to analyse, discuss and refine our game so that we can be ready for Qatar. It is important that we make conscious efforts to simulate the World Cup while striving for victory in the matches in front of us. It is not easy, but I feel like we were able to do that in today’s match. I also think it’s important to be prepared with multiple options, and to know how to react in certain situations. In regard to the system change we made at the end of the match, we wanted to test if we could make the shift properly in case we wanted to change the dynamics of the match.

MF/FW #13 MORITA Hidemasa (Sporting CP/Portugal)
I feel comfortable playing with Endo, and I am satisfied with how we played today. When Endo is playing as a number six, it is easier for me to look forward, and I think we are at a level where we can complement each other without making extra efforts. We had a great first half as a team but struggled to make adjustments when our opponents changed their system to a three-back formation in the second half. Although we were able to win the ball on many occasions, we were chasing the ball too much and needed to get on the same page in terms of how and where we want to challenge the ball, so that is an aspect we hope to improve ahead of our next match.

MF/FW #15 KAMADA Daichi (Eintracht Frankfurt/Germany)
Even when our opponents changed formation in the second half, we knew who was going where, and I think we played well as a team. We had a good idea of where we wanted to apply pressure, and everyone understood it to a certain extent. Playing as an attacking midfielder in a 4-2-3-1 formation is definitely one of the better options for me. We will be facing stronger opponents like Germany and Spain, and it's up to the coach to find the best way to play against them, but I think we as players can help the process by providing more options. The players are fully aware of the significance of these two matches because we all know that time will be limited before the World Cup.

MF/FW #25 MAEDA Daizen (Celtic FC/Scotland)
I was able to keep a good distance with Kamada and play as if we were playing two up top. Although I wasn't able to score a goal myself, I think we worked well as a team, and it provided us with a good opportunity to simulate the kind of battles that will inevitably take place at the World Cup. The opponents made many mistakes, probably due to the pitch conditions, but I think it would be ideal if we could play this kind of football in Qatar. 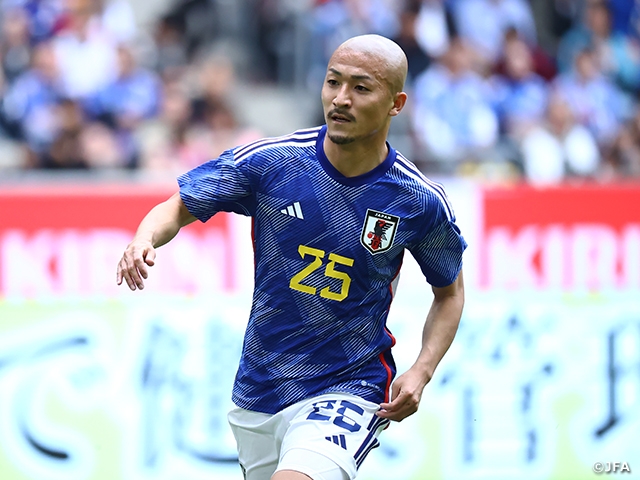 Gregg BERHALTER, Head Coach of USA National Team
We've got work to do. We clearly need to improve, but overall, really good experience for this team. Give Japan a lot of credit. I think they played a good game, and they gave us a hard time. I think at times we were well in the match and performing well, but overall, over 90 minutes, we could have been better. The guys didn't look fresh, and from a physical output we just looked a step behind. And then it's difficult, a team like Japan will punish you. The adjustment in the second half helped give us more control of the game, gave us more passes between the lines. But in the first half, I think it was just the lack of comfort on the ball, silly giveaways. We need to play with personality, we need to play relaxed, and need to play with intensity. And when we do these things, we’re a really good team. When we don’t, we’re an average team.