SAMURAI BLUE resume training ahead of match against Ecuador 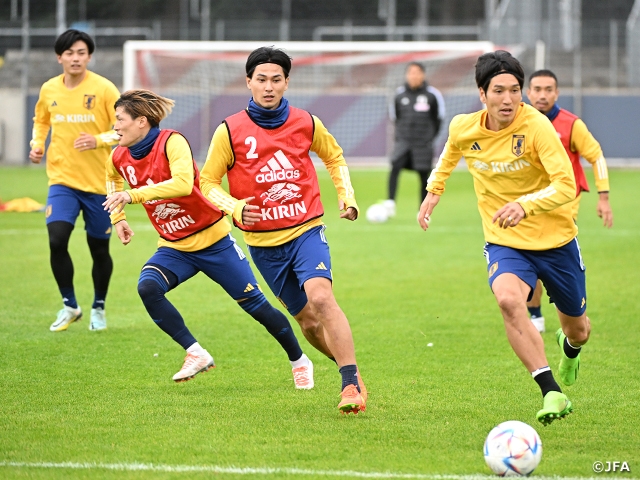 On Saturday 24 September, one day after the first match of the KIRIN CHALLENGE CUP 2022 against the USA National Team, the SAMURAI BLUE (Japan National Team) resumed their training in Dusseldorf ahead of their second match against the Ecuador National Team, scheduled to take place on Tuesday 27 September.

27 players took part in the day's training, as goalkeeper GONDA Shuichi (Shimizu S-Pulse), who was replaced at half-time after suffering a knock to his back, and MAEDA Daizen (Celtic FC), who felt pain in his right foot, both missed training to receive treatment at the hotel. TOMIYASU Takehiro (Arsenal), who played the full match against the USA as both a centre-back and right-back, left the team after the match due to club commitments.

On this day, players who started in the match against the USA, including KAMADA Daichi (Eintracht Frankfurt) who scored the opening goal, and SCHMIDT Daniel (Sint-Truidense VV), ITO Hiroki (VfB Stuttgart), and MACHINO Shuto (Shonan Bellmare), who started the second half, only went through a light workout that lasted about 30 minutes.

The remaining players, including MITOMA Kaoru (Brighton & Hove Albion FC) and DOAN Ritsu (SC Freiburg), who were used as late substitutes, worked up a sweat in a session that lasted about an hour and a half.

The field players went through passing and possession drills, before conducting shooting drills. The two goalkeepers, TANI Kosei (Shonan Bellmare) and KAWASHIMA Eiji (RC Strasbourg) were then added to the mix to conduct three-on-three with two strikers serving as neutral players.

The team then expanded the field to play seven-on-seven on a half-court, where they raised the intensity level while focusing on making quick transitions between offence and defence. During the session, ITO Junya (Stade de Reims) and SAKAI Hiroki (Urawa Red Diamonds), who had already finished their training, were seen talking with coach MORIYASU Hajime on the side-line.

Following the team session, players were given time to work on their own, as SEKO Ayumu (Grasshopper Club Zurich), who made his first callup to the national team, worked on his positioning with assistant coach SAITO Toshihide. FURUHASHI Kyogo (Celtic FC) and MINAMINO Takumi (AS Monaco) were seen working on their shots, while HARAGUCHI Genki (1.FC Union Berlin), NAGATOMO Yuto (FC Tokyo), and Kawashima took a jog around the field. TANAKA Ao (Fortuna Dusseldorf), HATATE Reo (Celtic FC) and two other players were spotted playing one-on-ones against each other.

On this day, former captain of the Japan National Team HASEBE Makoto (Eintracht Frankfurt) was also present at the training ground. Hasebe, who had played in three World Cups, took advantage of his club's time off to support the national team for three days, sharing his experiences with the players during meetings and mealtimes.

“It has been a while since I played for the national team, and there were many things I have noticed. I was able to tell that this team has a lot of potential for the World Cup,” said the former captain, as he headed back to Frankfurt after the session.

Also on this day, about 130 children who are attending local international schools came to observe the training session with their family. The children were given the opportunity to interact with the players before the training session, taking pictures and getting autographs with their favourite players, as a long queue was created in front of KUBO Takefusa (Real Sociedad).

The team will hold a training session behind closed doors on Sunday 25.

DF #2 YAMANE Miki (Kawasaki Frontale)
I think the game against the USA went very well because we were able to win the ball where we wanted. It reminded us that the Japan National Team is a very solid defensive team, so I have to be able to show that when I am on the pitch as well. In addition to playing solid defence, preparation is also important, and I hope to showcase my ability to get involved in our offence as much as possible. In terms of how we apply pressure as a team, the midfield and defence must work in tandem when our forwards decide to attack the ball. It is possible that our opponents get away from our pressure at the World Cup, and that is an area we must work on in the remaining matches and time we have.

MF/FW #7 SHIBASAKI Gaku (CD Leganes/Spain)
I think we played well to earn good results against the USA, and it felt like we were on the same page in terms of how we wanted to attack and defend against our opponents. If I am given the opportunity to play, it is likely that I would enter as a defensive midfielder when the team is behind, so I hope to showcase my strengths by making frequent runs to get myself involved in our offence. With only two matches left to play, players will be asked to make a case for themselves to earn a spot on the roster, while also helping the team earn a victory. I personally have always prioritised the victory of the Japan National Team, so I will continue to give my best to contribute for the team’s victory.

MF/FW #9 FURUHASHI Kyogo (Celtic FC/Scotland)
We fought pretty well overall, and I was inspired by the fact that we kept a clean sheet while scoring two goals. With so many talented players on this team, it really made me want to play on the pitch. If I am given the opportunity to play, I will do my best to fulfil my duty while showcasing my strengths. The words of Mr. Hasebe were so powerful, and I was inspired by all the conversations we had together over the last three days. Thanks to the support of so many people, I am able to play football wearing the Japanese flag. With a renewed sense of gratitude, I felt I had to cherish every moment I am given with this team.

MF/FW #15 KAMADA Daichi (Eintracht Frankfurt/Germany)
We held a meeting as a team to analyse yesterday's game. The video showed that we had a lot of chances to score, so I think it would have been better if we could have scored one or two more goals. Just as we had difficulties facing teams who dropped deep in their own territory at the AFC qualifiers, I think we can give Germany and Spain a hard time by doing the same. Yesterday, Germany lost to Hungary, who played very aggressively, and they showed us exactly what we had to do in order to give Germany a difficult time. I don’t think Germany are as strong as their prime years, so I think we have a chance of beating them.

MF/FW #21 DOAN Ritsu (SC Freiburg/Germany)
The USA were a relatively easy opponent to play against, so we didn't have to make changes to our approach. The team played very well in the first half, and the short counters were really effective. Personally, I had a difficult time making my decision on whether I should approach the centre-back or the wing-back after they shifted their system to a three-back formation. Knowing that Germany and Spain are going to make changes throughout the match, we need to be on the same page as a team to make adjustments on the pitch. That was something I kept in mind as I watched Germany’s game. I think we are expected to showcase an even better performance in our next game against Ecuador. The match against the USA allowed us to test different systems and combinations of players, so we should be able to enter the next match with more options in hand.

MF/FW #29 MACHINO Shuto (Shonan Bellmare)
The match against the USA has given me the opportunity to experience what it’s like to compete at the world stage, as the overall strengths and speed was totally different from what I am used to facing in Japan. Our team was doing a great job connecting passes into the attacking third, so I made conscious efforts to work in tandem with our midfielders. However, I wasn’t able to settle the ball and couldn’t take any shots, so I feel like I wasn’t able to showcase my strengths. This match really made me realise that I need to do more, and if I am given another chance, I will try to make the most of this experience and showcase a better performance on the pitch.

HASEBE Makoto (Eintracht Frankfurt)
Regardless of my role, I am very grateful to be given the opportunity to be involved with the Japan National Team, and to have been accepted so warmly by everyone. I feel like I have learnt a lot in these three days. I didn’t have much to tell them, but the players asked me many questions. It has been a while since I played for the national team, and there were many things I have noticed. I was able to tell that this team has a lot of potential for the World Cup. The players, the head coach, and coaching staff, all share a strong desire to win at the World Cup, and they are all engaging in discussions to make that happen. I think this was evident in yesterday's match and it really reminded me how wonderful it is to be playing for the national team.