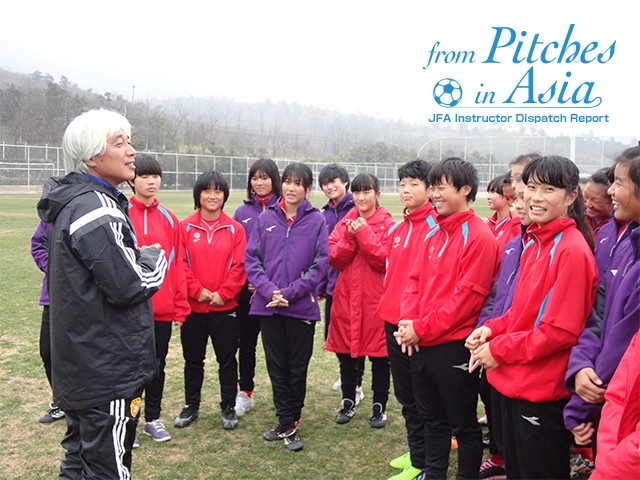 The third issue of “From Asian Pitches,” reporting voice of instructors in Asian countries, is from Mr. Kaneko Takayuki, who has taken up the head coach role of Jiangsu women’s youth team in China since June 2014.

About life in China - easygoing disposition

Before coming to Nanjing, I’d worried about some part because of the past history. But I’ve never felt any influence from history since I came here. There is a difference in lifestyle, but I live here in comfort thanks to support from Chinese staff and Japanese Association in Nanjing. Jiangsu Province is located northeast of Shanghai and has flat and broad land and plenty of water sources around Yangtze River. Its population is approximately 79 million. Although my living city Nanjing, a capital of Jiangsu Province, is just a bit broader than Ibaraki Prefecture, its population is 8.2 million, about 2.5 times that of Ibaraki, and the urban area is always overflowing with people.

Food here is not different from Chinese food we eat in Japan. The food is basically cooked to the natural taste of ingredients or spicy taste, so I enjoy various types of tastes with seasoning and spice that I make up by myself. What I found interesting was that 20 or 30 thin tablecloths were already covered on the table at the dining hall of the Centre and restaurants around the city. People here order an amazing amount of dishes and throw out fish and meat bones and shrimp and crab shells on the tablecloth. And I was surprised restaurant employees bussed the table altogether with the tablecloth after we finished eating.

In terms of transportation condition, there is bullet train called Gaotie and subway running north-south. Even though it seems the traffic network will be improved in the near future, the city has more traffic jam than Tokyo during the morning and evening. People don’t hesitate to cross streets no matter if there is a pedestrian crossing or no matter what the traffic light says. And they don’t care car horn as well. Boys and girls who look like junior high or high school students ride an electric bicycle with three people, sometimes five people, which I heard it can run about a top speed of 50 kilometres. That’s surprising and, at the same time, I tip my hat how they can drive without an accident.

My impression on people’s disposition is they are easygoing and don’t care about small things, which may be a special disposition of continent people. Not only yearly schedules such as national tournaments, it is a matter of course that the pitch where we use on the day and the time when we practice at are frequently changed. And the opponents we play against are decided just a day before the match. So I’m always required to predict and cope with various situations, just like a game. At training, I ask the players to improve their quality by offering the standard that I require them and share it with staff members beforehand. 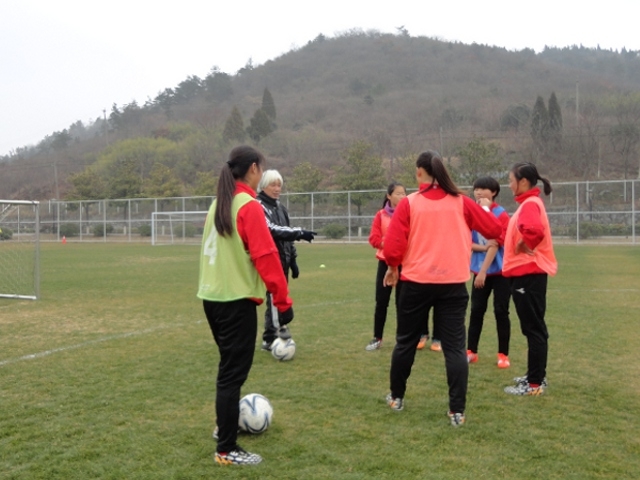 Changes emerging through coaching with praise

Jiangsu Football Training Centre, my coaching location, is one of the leading training centres in China that has eight and half natural turf pitches, one artificial turf pitch, a main accommodation with 235 rooms, five residential facilities, a dining hall with 400 people capacity and a meeting room facility.

Chinese girls do not tend to take action voluntarily, which is the term “waiting for direction” in Japan. It may be because of their education and family background, and I think it is also because of a reaction against the fact they are scolded by elders if they don’t act how they are told. Then, I implement a method “coaching with praise” as I give praise when a player’s play comes off well, when a player shows a good idea and when there is an improvement in a player’s daily behaviour even subtle. Chinese staff around me was sceptical at first, saying I’m too kind. Yet now they take my coaching with praise more positive because players have gradually shown some changes in their performance after a half year. The players also work on training more proactive and seem to realise the style of training to improve their skill with fun. The base of Chinese players is earnestness. When they think something is going to be an advantage for them, they try to carry it out by eagerly listening to my words. So I teach how to think about things on and off the pitch as part of their habit and how to answer their own question. Their enthusiastic attitude is what I also need to learn.

Talking about the workshop for women’s team coaches, not only women’s team coaches, did coaches from men’s, kids and senior teams in cities of Jiangsu Province took part in it. The participating coaches gave me positive feedback like “Japanese coach development goes way further than Chinese,” and “I want to know more about coaching for each generation.” I felt a bit embarrassed being praised so. There are a lot of cases where coaches demand speed and power in a match even during infancy under “a principal that victory is everything,” and blame player’s mistakes. I hope they understand my coaching style with praise, and it helps them acknowledge the importance of nurture. I will continue to regularly hold workshops during my stay.

Chinese people see Japanese women’s football with great respect and aspiration to the achievements of the FIFA Women’s World Cup title four years ago and the U-17 World Cup last year. But it’s not true that if they follow Japan’s way, they can win. The process leading up to the result is important. I will explain with patience to let them understand that those were not achieved in a day but achieved through efforts by lots of people involved.

By Jiangsu’s being a platform, I believe that that China in both men and women becomes competitive in the world leads to even Japan’s development. To aim at the ideal, I hope Jiangsu football will get better. We will work together to establish Jiangsu’s Way just like Japan’s Way.

There has been an exchange between Japan and China from very early times. Now it’s true that we have issues politically. But there is an emotional connection between individuals beyond such issues. I believe I can work here in China because of efforts by many people who promoted the Japan-China friendship before the restoration of diplomatic relations. I hope my work also helps both countries understand each other through football. Hopefully, we can build a real relationship someday that we dare not to use the word of “friendship.”

He used to be the head coach of Japan Youth Selection, a coach of JFA National Training Centre Kanto and the junior youth head coach and academy director of Mito Hollyhock. He has been dispatched to Jiangsu, China since June 2014.