From Pitches in Asia – Report from JFA Coaches/Instructors in Asia Vol.18: TAKEDA Chiaki, Technical Director of All Nepal Football Association 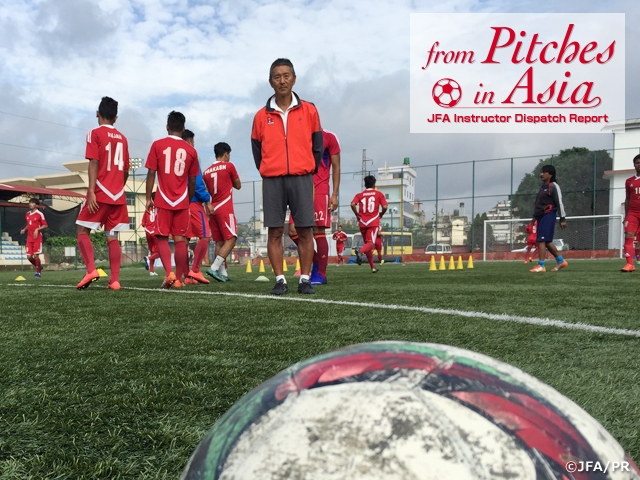 The eighteenth edition of “From Pitches in Asia”, in which we introduce the viewpoints of instructors active in Asian countries, is written by TAKEDA Chiaki, Technical Director of the All Nepal Football Association (ANFA).

I live in Kathmandu, where is a basin surrounded by 3000-metre-high ‘hills’ with no specific names – as it has to be more than 7000 metres high to be classified a ‘mountain’ in this country. You can see the Himalayan Range at even height through the windows of an airplane, which makes me realise the height of the mountains.

You could still see traces from the earthquake last year everywhere in town. The Durbar Square, a World Heritage Site, which is made of bricks and clay, remains in ruins, and also the football stadium is not in an operational condition.

Nepal is suffering from chronic energy deficiencies, with a nine-hour blackout every day. There is one traffic signal in Kathmandu which I have never seen it working. As there is no train in this city, people take buses as the main public transportation. Families rely on motorbikes as a means of transport, and four people casually ride on one motorbike. They have heavy traffic during the daytime, and pedestrians cross the road everywhere and anytime. One day, I was really shocked to see a wild cow in a city for the first time, which sat dawn after calmly crossing a crazy road. In Nepal, cows are messengers from God, and people do not eat beef.

ANFA has a well-structured instructing system, which is one of their strongest aspects. On top of that, Nepalese instructors are passionate and players have discipline. If we set an aim and could make a right approach, they have good chances to improve in a short period of time. There are many domestic competitions in various categories across the country, which we don’t see many in other countries of South Asia. Thanks to the ANFA’s initiative to promote football, people understand the importance of technical practice. On the other hand, their current issue is that they have not enough coaches. As coaches do not have enough understanding on tactics or strategy for their teams or individual players, they cannot give correct instructions to the players. In May, eight coaches have obtained AFC A-Coaching License for the first time in history, and they are the best coaches in Nepal for now. My mission is to improve the quality of coaches, while increasing the number of coaches who can instruct in tactics. I will make my best effort to the development of Nepalese football. 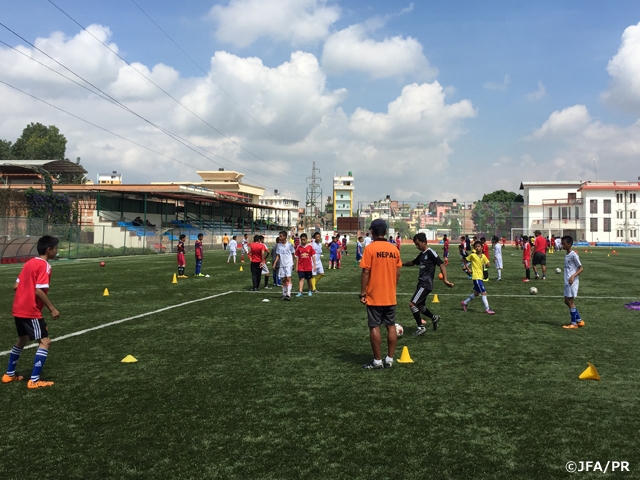 We are planning to hold training courses for instructors to develop their skills across the country from this month. The firstcourse is a two-day session at the end of July, in which the main domestic instructors and the ANFA coaches will attend. I will share some basic knowledge about tactics, and how to instruct them through theories and practical trainings. I will use the Class C training materials, the text and the DVD provided from the Japan Football Association (JFA), which are translated into Nepalese. We will analyse the current status of Nepalese football, followed by learning tactical theories, coaching methods, and then move on to practical training.

As there was no ‘Technical Department’ in ANFA, which organises and manages series of training courses, instructor development, or national team improvement, we are planning to establish one, aiming to start this year.

On the cusp of change

To teach the method for instructing in tactics, I asked Nepalese coaches to become a player and attend my coaching demonstration under a particular theme. Even the coaches, who had played in the national teams, have never experienced this type of tactical training before, and all of them showed strong interests in my method. After sharing JFA’s textbooks and DVDs, some of the coaches started to use those materials to instruct in tactics. More coaches became keen to ask about the instructing method now. I can see that their methods are changing gradually, but for sure.

None of the players and the coaches understood the importance of a basic knowledge in teaching tactics – for example, ‘observing the situation before controlling the ball’ or ‘swiftly changing between attack and defence’. Since I kept asking the U-14 coaching staff and the players to focus on these, they have showed so much improvement recently.

Mr. GYOTOKU Koji, who is also dispatched from Japan to lead the Nepal National Team as Coach, pointed out the same problem, and focuses on teaching basic tactics very diligently. I advised other coaches to observe Gyotoku’s practice methods in detail. As a result, some of the other teams started to hold a practice session in a similar way.

With establishment of ‘Technical Department’ in ANFA, as I mentioned above, we can systematically improve the national teams, develop young players, and nurture instructors. I will discuss with ANFA about organisation structure and necessary budgets as well as human resources, so that ANFA can accelerate their development strategy. 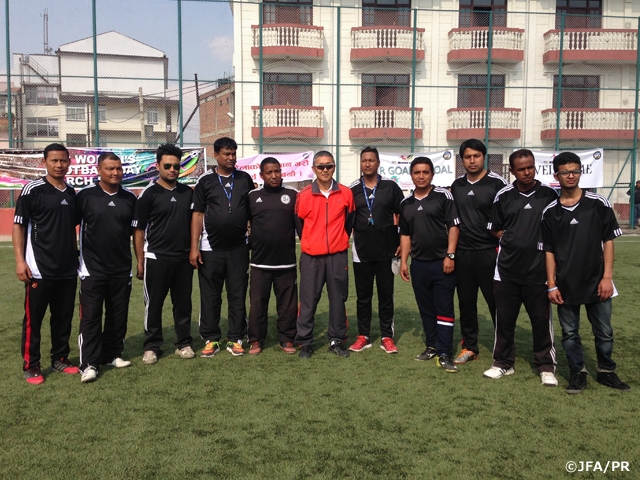