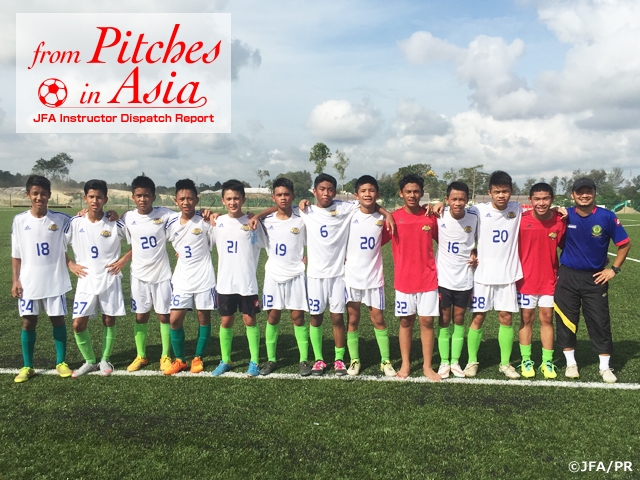 The thirteenth "From  pitches in Asia" report, in which we introduce the viewpoints of coaches/instructors active in Asian countries, is written by FUJIWARA Takao, Coach of U-15 Brunei Darussalam National Team.

It’s been nine months since I started to work in Brunei. In this country, I feel the time flies slowly, and people tend to take things at a slower pace and are very relaxed compare to Japan. Consequently, players do not seem to take football competitively enough. The only time I can see their competitiveness is when people try to secure parking spaces at supermarkets or shopping malls. As there is no train in Brunei, parking areas are always very busy. So people try to head towards a small space even from behind. I do hope they can play football with as much desperation as this.  In addition, the presence of religion in everyday life is very new to me. You stop a match at prayer time, which comes five times a day, which shows the importance of prayer. Also, I was very impressed to see wild animals, such as monkeys and large iguanas on the way to pick up players in the countryside. The temperature usually stays over 30 degrees even in December and it is hot all through the year, which may be one of the reasons for this country’s laid-back atmosphere.

There are division one and two in the domestic football league in Brunei, and there are two teams that hold youth teams. We plan some grass-root activities twice a year, and in December, around 100 of U-12 participants from across the country came to enjoy the game. Since an artificial turf pitch was built in December which is owned by National Football Association of Brunei Darussalam, six teams including the national team share the pitch for their practice sessions. They also use public facilities to practice when needed. One of the star players here is KAGAWA Shinji, who used to play for Manchester United, as people often watch Premier League on TV. He proved that a small player with technique could compete against bigger players.

Currently, football tends to be considered "entertainment" rather than "sport" by the players and parents. One of the reasons is that because there is no professional team or player in the country. The basic way of life in Brunei is to study hard and live stably for the rest of your life by becoming a government employee; 70 % of the citizens work in the public sector in Brunei. So many guardians may think that "football reduces study time." As players cannot even come to the practice ground without their guardians’ lift, it is vital to have understanding from parents.  I always try to build good relationship with them through interviews and daily conversations. People in this country are culturally very relaxed about timings, and no player turns up at the practice session on time. Just after arriving here, I was too strict on time, and the players couldn’t understand why because they are not used to be on time in their life before.  This is one of the lessons I have learned from my experiences. 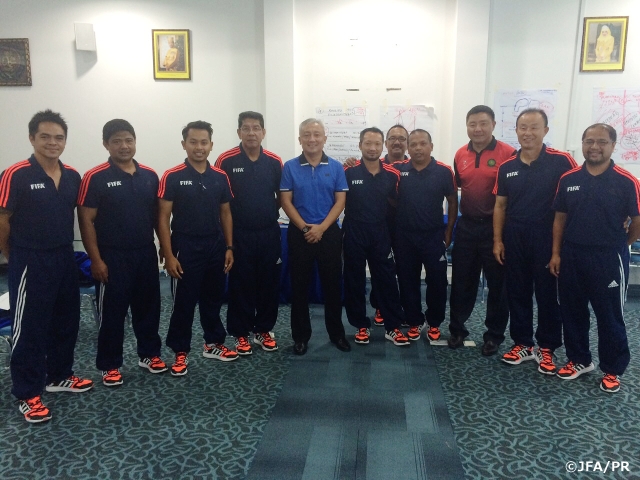 My activities and aims

I hold practice sessions and scout around as a coach for U-15 Brunei Darussalam National Team. This year’s aim is to establish a domestic youth league in order to  develop their basic skills for the coming qualifiers for the international competition. When I started working here, dribbling was a major technique and passing skill was poor because there was no ball control.  I therefore focused on improving control of the ball in practice sessions and moved on to improve skills on better judgment. As a result, these two points have definitely improved.  Players enjoy my practice as most of them are new training for them.

"The AFC U-14 Regional Festival", in which each country from the ASEAN participated, was held in Brunei last year. Although we had a four-month preparation period for the festival, I spent the first two months scrambling around gathering players and struggled the following months to improve the team due to Ramadan. As a result, we lost all four games in the festival.  Actually, it was a good experience for the players to understand that preparation is vital for matches, especially at international competitions.

Thanks to our forerunners, many leagues and championships in various categories are held in Japan. I had never imagined that it was not always the way in some other countries. The strength of Japanese coaches I believe is to "be hard-working, eager to learn, and patient." I was expected to use some "magic" at the beginning, but there are no magic or shortcuts in any sports, including football. I will continue to make my best effort to contribute football and people in Brunei. 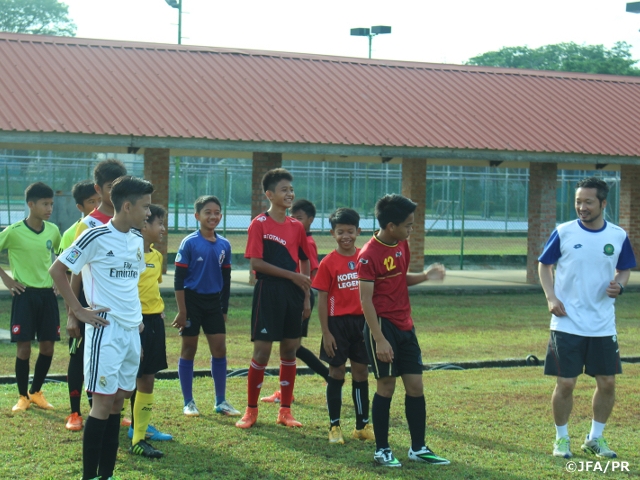