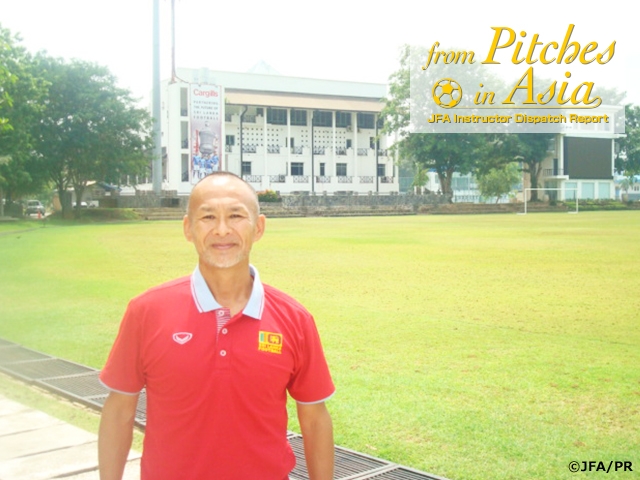 The twelfth “From the pitches of Asia” report, in which we introduce the viewpoints of instructors active in Asian countries, was written by SUZUKI Chikashi, the coach for the Sri Lanka National U-16 Team.

With winds from the Indian Ocean, be the pearl of South Asia.

About the country of Sri Lanka and my present life.

Sri Lanka is an island country in the Indian Ocean. Being close to the equator, the weather is warm year-round. The size of the country is about the 80 percent of Hokkaido of Japan, while the population is approximately 20.27 million as of the year 2012, whose majority consists of 72.9% of the total population by Sinhalese, 18% by Tamils and 8% by Moors. In terms of the religion, 70 % of the population is Buddhists and there are also Hindus, Muslims and Christians. You can say Sri Lanka is fairly multi-racial and multi-religious.

I was dispatched to Football Federation of Sri Lanka (FFSL) in October in 2014 to be the coach for the U-16 National Team. With additional request from FFSL, I also serve as a coach of men’s and women’s national teams in various categories, as well as Technical Director.

Based on my past experience of coaching in other Asian countries, it is important to first understand the local culture and build friendly relationships in order to understand current structure of FFSL and their strategy. I eat curry with bare hands with my colleague, enjoy lunches and dinners, and play football together to get to know each other. By being part of them, both of us have better understandings and often exchange ideas on Sri Lanka football and how we could solve issues we are currently facing. 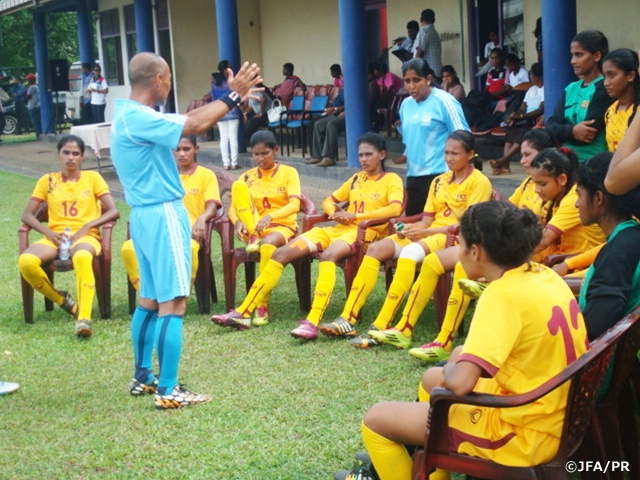 Due in part to the civil war that the country endured for many years, the environment for sufficient growth of football was hard to be found for long in the country. In the 1990s, the national league in Sri Lanka was regarded one of the best in the South Asia region. In 1993, Sri Lanka National Team visited Japan to play World Cup qualifiers against Japan National Team led by MIURA Kazuyoshi and RAMOS Ruy. Soon after, the country started focusing more on cricket and rugby, and many football fields were turned into cricket and rugby fields, which delayed the growth of football.

In the 2018 FIFA World Cup Russia Asian qualifiers 1st round, Sri Lanka lost to Bhutan, then the lowest-ranked team in the FIFA ranking. Other categories, both men and women, are losing to other South Asian countries as well. One of the biggest issue is that the sense of crisis is little found in this country despite their football being at the worst ever in their history. After the said loss in the World Cup qualifier, players literally cried and coaches were also very disappointed. I submitted a technical report after the match on the necessary changes, and the FFSL is now working on development plans which I would very much like to be involved with.

Needs of development plans for long-term

As I mentioned so far, football in Sri Lanka needs a drastic change. Since it is necessary to change the mindset carried within the organisation in order to develop players, I have proposed to executives of FFSL the organizational reform and long-term vision for the development of young players.  At the same time, I often have meetings with staff and share opinions. Little by little, they have come to understand the idea of building a new youth development program for the better future of football in Sri Lanka.

In Sri Lanka, kids over 13 years of age play football usually at school in PE classes, break time between classes and after school, and I don’t see them often playing football in other occasions. When you go to countryside, kids who can’t afford football shoes play with a worn-out ball and their bare feet. When we bring a brand new ball to them, they all will come at it and take it just like going after some kind of treasure. And they play with it with all their heart.

They are in so called “the golden-age” period in their young life which is essential for learning how to enjoy playing and for improving their ball-controlling technique and other fundamental skills dramatically. The most important thing to develop football in Sri Lanka is to expand the grassroots environment to enjoy playing football.

The kids including the youth generation in this country are hungry for football. Once they start training with a right program in an organised environment, we can expect that outstanding talents will come out, taking advantage of their inborn physique of long legs and arms and athleticism.

A detailed project has been launched with a plan to start building a national training centre in 2016 for the long-term development of the youth generation.  As I mentioned, kids start playing football relatively late such as at around 13 years old. So developing talents at younger age is essential. Our academy aims to provide a training program for age 10 to 15 in five major cities with an eye for finding talents and training players in a broad scale. But the reality is economic disparity only allows kids from upper-class families in a big city such as Colombo to be selected to attend a training centre.

We also are planning to work together with the Sri Lanka branch of JICA (Japan International Cooperation Agency), which has a partnership with the JFA and J.League. JICA’s football volunteers have already helped us so far in various projects. They are dispatched in cities in Sri Lanka to teach football as they live together with local people. Their cooperation include collecting information and translating at the same time as they learn how to teach. This bilaterality makes our relationship very successful.

In conclusion, I would like to introduce a quote of Martin Luther. “Even if I knew that tomorrow the world would go to pieces, I would still plant my apple tree.” My father gave this to me before he died in the Great East Japan Earthquake, and I cherish this quote every day. With this in mind, I will make tireless effort with patience  in this current project, and my goal is that football in Sri Lanka one day becomes the pearl in South Asia. 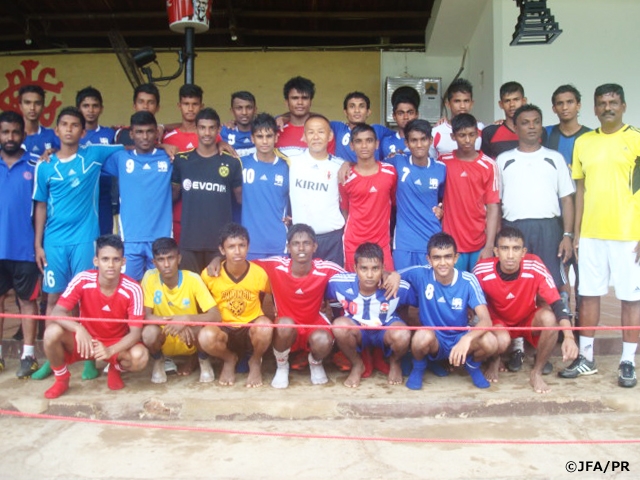