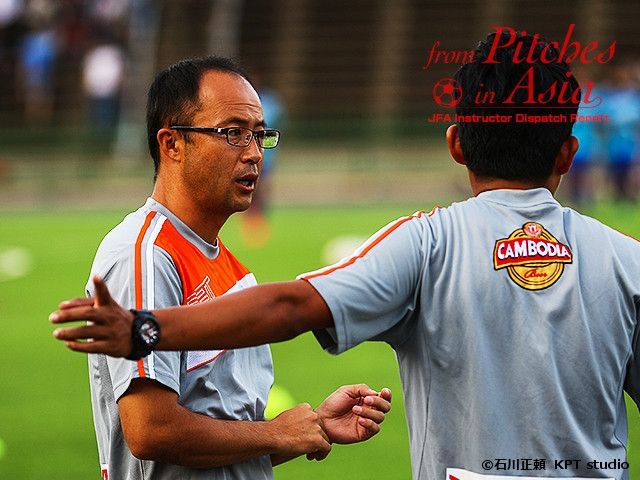 The eleventh “From the pitches of Asia” report, in which we introduce the viewpoints of instructors active in Asian countries, is written by OHARA Kazunori, the Technical Director, Football Federation of Cambodia.

I’ve been in Cambodia since March. I was surprised with the heat in April and May, which was apparently the hottest season.  As the roads in Phnom Penh, where I live, are heavily trafficked and have no enough drainage system, the roads can often flood during the rainy season. I struggle with the fact that a drive may take over an hour due to flooding or heavy traffic, even though it should only take 10 minutes. Having said that, there are many advantages – laundry dries so quickly, I can enjoy swimming outside still in November, and the coconuts taste beautiful here.

I was the Coach of the Bhutan National Team before I came to Cambodia. Having a good environment is vital for the players to improve themselves and get positive results. Therefore, even my job was a Coach of the National Team, I was also very keen the peripheral environment, such as their youth development system. As the “Technical Director” here in this country, I am required to consider various areas in order to achieve good results in the future.

Cambodia will host the SEA Games (South East Asian Games) in 2023, and aims to “be the Champion as the host country”. I feel responsibility as well as enthusiasm to think what kind of environment can help this country to achieve their goal.  Although there are many important measures to be taken, each person have own opinions.  It is not easy to earn understanding and support from everyone, but I’ll try my best, bringing what I leaned in Bhutan as well. 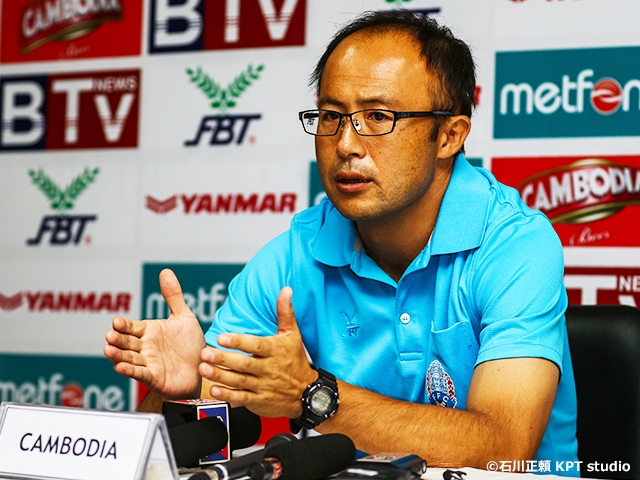 Football in Cambodia has been given a boost by getting through the first round of the Asian Qualifiers for the 2018 FIFA World Cup. We must maintain this momentum. The Academy was established in 2014 under the slogan described above – “be the Champion at 2023 Sea Games”, and currently the U-15 players are practicing with the Japanese Coach IKI Yusuke. (IKI Yusuke) The age limit of the Sea Games is U-23, therefore the current Academy pupils will play the Sea Game in 2023.  At this moment, there are not many youth teams apart from the Academy who regularly hold practice sessions so that we cannot expect too much to raise the level of the players.

In order to have more opportunities, we are encouraging club teams, who belong to the top league, to assemble youth teams, so that we can start the U-16 league in 2016.  Also, I had a meeting with 40 development coaches of the Football Federation of Cambodia and requested them to share their players’ list as well as training schedules. Since there are some coaches, who couldn’t perform their activities due to limited support, I am currently communicating with them by visiting each site to understand their situation. I am also proposing to host workshops and grassroots-festivals for coaches and U-12 players in 2016, on top of starting the U-16 league.

There are currently three Japanese coaches, including Mr. KARAKIDA（the Referee Director）and Mr. Iki.  The “strength of Japanese coaches” I consider is that they are serious and faithful, as well as patient. They are often highly evaluated because the Japan National Team is getting positive results in Asia. Being a foreign coach makes personal relationships easier in other countries, which is an advantage. We Japanese coaches support each other, laughing off every-day challenges during our occasional dinners out.

Home games are held at the Olympic Stadium in Phnom Penh, and it is filled to capacity for every match, which started happening recently. In front of more than 50,000 people, I led the first two games of the 2nd Round Qualifiers as the Coach of Cambodia National Team. We did not play well in the first match against Singapore, which made me really frustrated. As for the second game against Afghanistan, we could not get a good result despite the players’ efforts, and I felt deeply responsible for it.  Meanwhile, I do appreciate that the spectators cheered us a lot, which must have encouraged the national team to improve themselves to a higher level.

We will meet again the Japan National Team in Cambodia on Tuesday 17 November. Cambodians tend to be excited just before the match, while Cambodia-residing Japanese people have already started to prepare themselves. They organised a welcome party, sold tickets for Japanese people as well as advertised escort kids for the Cambodia National  Team. The Japanese club team in Cambodia, “Cambodian Tiger” will play a friendly against “Avispa Fukuoka U-18” on 15 November.

I hope the Cambodia will defend more tenaciously than the previous away game in Saitama, while making sure to score with their limited opportunities. I expect all the players to perform well, especially the forward CHAN VATHANAKA. I have to point out his excellent scoring sense. If he is in good shape, he will play well against Japan. 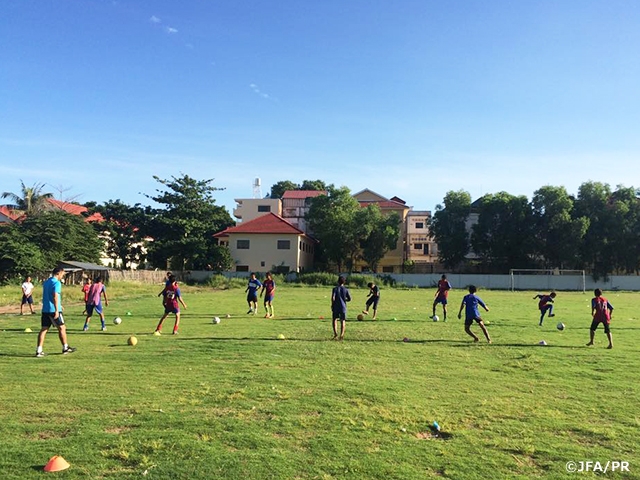