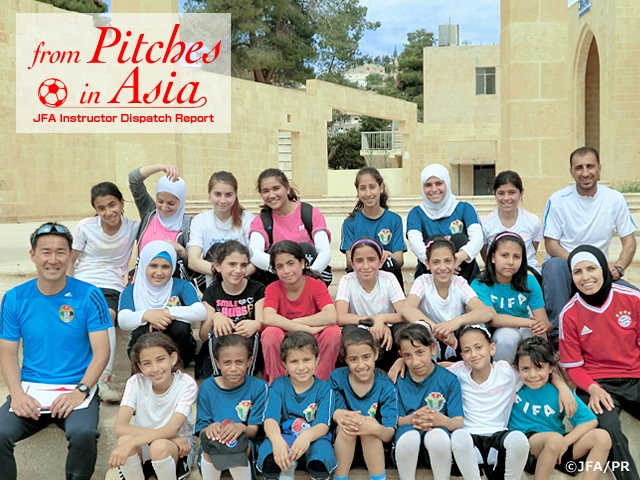 The seventh issue of “From Pitches in Asia,” reporting voices of instructors in Asian countries, is from MITA Michiteru, who has taken up a Jordan Women's Training Centre coach role in the Middle East.

Although there was a security concern after the hostage incident in Syria, citizens life here is still the same in the way they used to prior to the incident. The climate in my town, suburbs of Amman, is warm and its area is surrounded by highlands with forests. You would not believe the turmoil when you see families enjoying a picnic on weekends.

Their culture is similar to Japanese "Wa" culture in the sense that their belief of maintaining group ties is important as Jordanian "share traditional dishes arranged on one plate with everybody" and "say their prayers together five times a day."

The most popular sport among females in Jordan is football. Above all, Stephanie Al-Naber is a charismatic star. There used to be a way of thinking that "Sports are not something women are supposed to play." But now sports participation by individual free will has been increasing.

After the Jordan Football Association opened "Prince Ali Women's Training Centre" (hereafter "the centre") at 13 different locations around the nation, their development effort has gradually blossomed as the Jordan senior national team won the West Asia region tournament in 2014 and the U-14s clinched the title in the same region in 2015.

The FIFA U-17 Women's World Cup is scheduled in September 2016 in Jordan, for the first time in the Middle East. It is expected to carry out environmental improvements such as stadium renovation and football pitch development as a spark to the women's football development in the West Asia region.

I was assuming there would be a lot of restrictions such as having training indoors, yet players in the centre enjoy the time in a surprisingly lively manner. Because they do not have a custom of outdoor activities, friendlies between centre teams get heated up with them jumping around, cheering and shouting.

Whether and how each player wears Hijab, a veil covering their head, is depending on their family's faith or their own will. But if they want to put it on in a football match, there is a regulation stating it must be "the same colour as their shirt" and the match commissioner checks it before the match.

I am currently a technical director of the "Jordan FA Prince Ali Women's Training Centre." I regularly travel around the nation's 13 centres to work on improving players' ability, as sharing the development vision with all 26 coaches. About 30 girls between ages 10 and 15 attend each centre and have training three times a week.

At the beginning of my coaching journey in Jordan, some centres stopped their training session without permission, saying "We don't have a school bus," or "The pitch is not available for use."

Then, we started sharing various activities at different centres on Facebook and other SNS services, and with a positive competitiveness brought up among them, they started to work harder and try to learn from each other. When we set up friendlies and league competitions to provide more match playing opportunities, the approach picked up stream, and more demand for more matches came out from coaches.

To expand the base of football, we also hold a lot of coach workshops for female physical education teachers and grassroots festivals for girls under 10 years old. 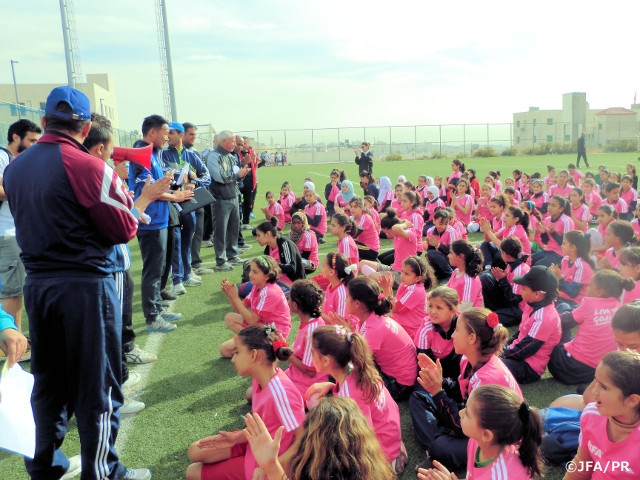 In the Olympic Asian Qualifiers Round 1, we have matches against Vietnam, led by head coach Norimatsu dispatched by the JFA, and Chinese Taipei, also led by Japanese coach YAGIRA. Both teams are better than Jordan.

We are determined to avenge our defeats against Vietnam in the AFC Women's World Cup 2014 and Chinese Taipei in the Asian Games. The Jordan women's national team were assembled right after the season end of the domestic women's league in May and have been training in preparation for the tournament even during Ramadan. I think they will draw more attention in the country including media when it comes to the tournament.

One of the approaches we are taking for the future is to provide players from our centres for the national youth squad. We continue the elite programme U-13, which has been held since last year. And we prepare better match-like environment and improve daily training through the cycle of the MTM (match-training-match).

The second is to build a long-term player-development system and improve its environment in cooperation with Jordan's FA.  The players graduate from our centres at age 15, but if they are not selected to the youth national team, there is no environment where such players can continue training. It is a big issue to establish another place for them.

We will also have further discussion with school officials on various approaches such as building familiar locations to play football for girls who get interested in it.

With my coaching experience in Bangladesh, Sudan and India, I will try to solve issues further with local staff, respecting their experience, knowledge and culture. 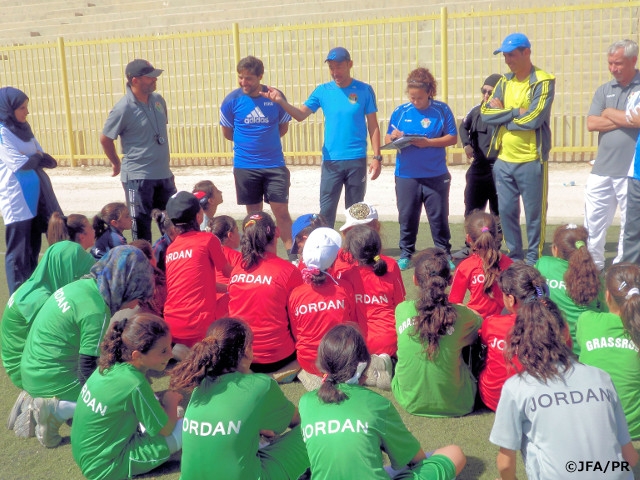