“10 years of Sports Kokoro Project, which tried to be considerate of children’s feelings” 10 years since the Great East Japan Earthquake – Relay Column Vol.7 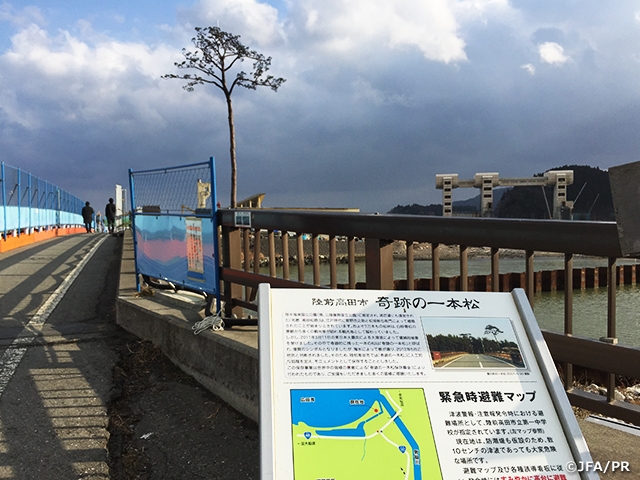 “Sports Kokoro Project” was launched to support the mental recovery of children affected by the Great East Japan Earthquake. The project came to an end this March, after carrying out countless activities over the past 10 years. Here we will share the essay of Mr. TESHIMA Hideto, who was the operating manager of this project.

The Sports Kokoro Project puts an end to its 10 years of activity. It feels like a long and short 10 years… I am deeply moved when I think of the children who experienced the great earthquake and those “Teachers of dreams” who tried to be considerate of the children.

In 2006, JFA launched the “JFA Kokoro Project (For more details)." The year before that, reports of children who were forced to commit suicide due to bullying became a major social issue.

“We have a lot of opportunities to teach football to our children, but we are not spending enough time teaching the mental aspects, such as the sense of justice, ethics, and compassion for others.” The project was launched and examined under the direction of JFA Executive Advisor KAWABUCHI Saburo (then JFA President), who was ashamed by the ongoing coaching system.

After a one-year preparation period, the project started its “Dream Class” at primary schools in various regions in April 2007. From the beginning, Mr. Kawabuchi had the vision to get the entire sports world involved in this project, and I also had no intention of making this an activity solely carried out by JFA. That is why we recruited volunteers from various competitions other than football to take the podium as the “Teacher of dreams.”

The “Dream Class” got off to a good start and five years after we launched the JFA Kokoro Project, the Great East Japan Earthquake struck Japan. News of the disaster was reported every day. One day, Mr. Kawabuchi saw a man saying on TV, “It cheers me up when the children are energetic and happy.” That was when it occurred to him that “Children’s smiles give the adults energy to live. Sports give the children energy and hope, and athletes are their role models.”

One week after the earthquake, we started editing the video of the “Dream Class.” A week later, on March 25, I brought the DVD and visited Mr. CHO Fujio, who was the Chairman of Toyota Motor Corporation, accompanied by Mr. Kawabuchi.

Mr. Cho was to become Chairman of the Japan Sports Association (JASA, currently Japan Sport Association/JSPO) on 1 April of that year. Mr. Kawabuchi's intention was to spread the “Dream Class” throughout the affected areas with a sense of urgency under the initiative of the JASA. Mr. Cho said, “I feel guilty to steal JFA's know-how,” but saw the DVD and immediately made the decision.

On 31 March, a meeting was held by officials from the JASA, JFA, Japanese Olympic Committee (JOC), and Japan Top League Alliance (JTL). At first, there were opinions that deviated from the purpose of the project, but that was because the fundamental concept of the project was not yet understood by everyone. Once everyone saw the actual “Dream Class,” we all got on the same page and started to move toward realisation. 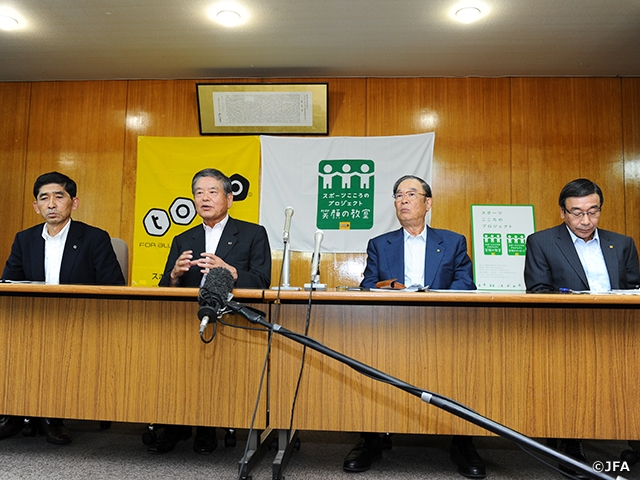 Under Chairman Cho, the “Sports Kokoro Project” was launched by JASA, JOC, JFA, and JTL. Financial support was provided by the Japan Sport Council (JSC), while we sought for guidance from school counsellors and psychologists regarding the curriculum.

The difference between the "Smile Class" of the Sports Kokoro Project and that of the JFA (Dream Class) is that the former is for children who have experienced the earthquake. Some of the children have lost their family and friends, while some have lost their home by the tsunami. Therefore, “Teachers of dreams” have different pressures and responsibilities than a regular teacher. You must pay close attention to the wording and facial expressions. Above all, it is important to be considerate of children’s feelings and focus on their future.

Despite the difficult challenge, nearly 500 athletes volunteered to help the children in the affected area. 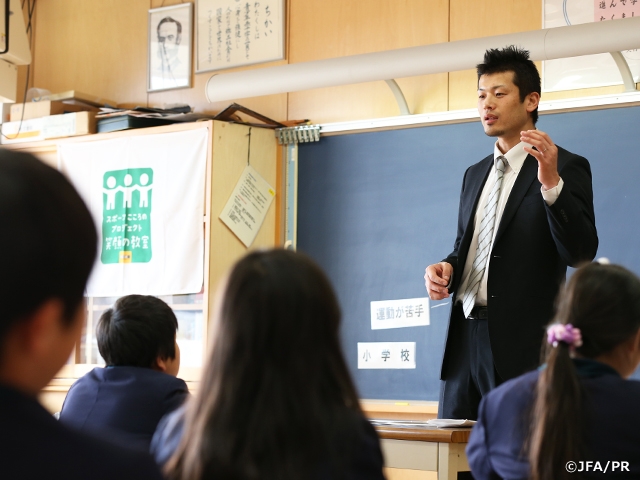 “I want to join the self-defence force and help people in need”
“I want to become a carpenter and build everyone's houses”
“Thanks to the class held by the teachers of dreams, our class really became as one. It gave me the courage to stay positive and move forward.”
“Thank you for giving me the world ‘dream’ today.”
“Both teachers were very funny, and they taught us the importance to never give up. Please think of us when you are having a bad day.”
These are some of the messages we received from the children who attended the “smile class” 10 years ago. They are all grown up now and living their own life. When they come across a crossroad of their life, I hope they remember the teacher of dreams.

Awareness towards the affected areas tends to fade over time, and support cannot be provided forever. However, the project was wholeheartedly carried out for 10 years throughout the affected areas. In 2020, the final year of the project, classes were held online due to the affect of the pandemic, but the teachers of dreams continued to deliver the same energy and quality, as if they were holding a face-to-face class.

Needless to say, JSC's financial support helped the project to carry on, but above all, we wouldn't have been able to continue without the “enthusiasm” of the teachers of dreams, who really cared about the children in the affected areas.