“Together with J-Village” 10 years since the Great East Japan Earthquake – Relay Column Vol.8

For our eighth column, we conducted an interview with Mr. TAKATA Toyoharu, who was the Vice President of J-Village at the time of the Great East Japan Earthquake, to reflect on the time when J-Village was founded and how they recovered from the natural disaster.

Japan's first national training centre dedicated to football. J-Village was founded on the land rented from Naraha and Hirono in Fukushima Prefecture, with Tokyo Electric Power Company (TEPCO) spending 13 billion yen to build the facility. Upon completion, it was donated to Fukushima Prefecture and started operation in 1997. J-Village, which operates as a corporation, is customarily headed by the governor of Fukushima Prefecture, and the VPs are served by TEPCO officers and JFA directors. Among them, the VP appointed from JFA was in charge of the actual operation. As a member of the JFA executive committee, Takata Toyoharu became the VP of J-Village, and has been promoting the business since 1996, including the facility’s preparation era.

Takata joined Toyo Kogyo (currently Mazda) after graduating from university. Following his time as a player in the Japan Soccer League, he started his coaching career at Mazda SC as an interpreter and assistant coach for Hans OOFT, who later became the coach of the Japan National Team coach, followed by his tenure at Sapporo Mazda.

In 1993, when the J-League kicked-off, he made his return to Hiroshima and started working as the development director for the academy team of Sanfrecce Hiroshima.

When J-Village was founded in 1997, the local's expectations for the project were high as a catalyst for regional revitalisation. On the other hand, J-Village was also thought to be too far away from the average football enthusiast. The facility was perceived as a facility used by a limited number of elite teams such as the Japan National Team, which made Takata think, “The operation will not go smoothly without the support of the locals.” Various ideas were brought up and implemented, as they tried to communicate with the local residents even before launching the facility. One day, a local coach requested for a training school for the local children. In response to this request, once the facility opened and the busy season had settled down, a training school was setup for the local children during summer vacation. The school was first made available for primary school students, and soon made available to junior high school students, too. Among the children who attended the school, there were players who later joined the Japan National Team. TAKAHAGI Yojiro was in fifth grade when he started to attend the junior high school course.

March 1998, the balance of the first year was in the red. However, Takata was confident that he could turn the numbers around from the next fiscal year onward. His plan was to rework the management. In the first year of operation, they had entrusted a private meal service company owned by a hotel to cover the needs for food and accommodation. However, the supplies were all being purchased in Tokyo, which was an aspect that could be improved. “We decided to purchase all ingredients and other consumable supplies from the local area. We had local business-people gather and disclosed all the purchase prices of ingredients and consumables up to that point. We promised to make them our suppliers if they can cooperate with us and provide the goods at the same price we had been purchasing.” At first, the local business-people seemed to think that J-Village was a facility owned by the prefecture. However, when Takata mentioned, “No, it's a corporation,” it changed the way people looked at J-Village. Furthermore, cooperation with the local community extended to accommodation. During times when many competitions were held at the same time, such as summer vacation, there weren’t enough accommodation at J-Village. Therefore, a system was created to allocate the overflowing people to local hotels. “We didn’t want to allocate people arbitrarily, so we asked Tomioka Town to form an hotel association, and have them distribute the overflowing number to each inn.” The attentiveness from the perspective of the locals had a huge impact, and the local residents' understanding of J-Village deepened day by day.

There were also improvements in medical care. There were practicing physicians at Hirono and Naraha towns, but they were closed on the weekends. Even if someone had a fever or injury, there were no hospitals to transport them. However, that problem was quickly solved when Takata met HONSHUKU Takashi at a gathering where he was asked to give a lecture. Honshuku was the vice chairman of the Fukushima Sports Association, but his main job was the director of a public hospital in Kunimi Town, located in the northern part of the prefecture. After visiting J-Village and learning that the area had no hospitals open on the weekends, Honshuku acted quickly. He sought help to the local medical association, prompting many doctors to acquire qualifications for a sports doctor. Soon, volunteer doctors took turns every weekend to stay at the facility, creating a system where doctors were available from Saturday evening to Sunday morning at J-Village. In July 2002, the “J-Village Sports Clinic” opened with the support of volunteer doctors, which was a rare case in Japan.

In 2003, after seeing the operation of J-Village getting on track, Takata returned to Hiroshima and held several positions, including the general manager position of Sanfrecce Hiroshima. It was in 2009 that he returned to J-Village to serve as the VP once again. Ever since the concept of a National Training Centre came up, Takada had an idea that he wanted to achieve. It was something he noticed when he visited facilities overseas. It was common to see doctors and physio therapists involved in rehabilitation stationed at these training centres. Some have told him that a medical centre was essential. In September 2009, the long-sought JFA Medical Centre opened on the premises of J-Village. It was the only medical facility in the area equipped with MRI testing equipment and operated directly by JFA. The newly established medical centre was used not only by the users of J-Village, but also by many local residents. It was especially popular among the elderly. Since there were no orthopaedic surgery in the area, on the day of the opening, elderly people with physical pain were seen forming a line to get a diagnosis. Shortly after its opening, the Medica Centre within J-Village has become an integral part of the region. However, no one at the time thought that it would be suddenly put into a dormant after operating for only two and a half years.

On the afternoon of 11 March 2011, Takata was at Sendai for business. The earthquake struck just after he got into his car to make his way back home. The asphalt road in front of him rippled like liquid. It was a sight he had never seen before. It was after 1 a.m. when he arrived at J-Village, as it took him 12 hours to drive through the inland area. About 200 residents of Yamadahama escaped the tsunami and evacuated to the gymnasium. The next morning, after he finished providing the second meal and while he was talking about the evening meal, he received a message from the government saying, “Please evacuate immediately.”

"I don't remember the exact date and time. I saw the tsunami footage on the night of the 13th, the day after I moved to Iwaki No. 6 Elementary School. At that time, information on the nuclear power plant did not come in. We didn’t have enough information at the evacuation site at the time.” On 14 March, TEPCO requested to use J-Village as a base for disaster countermeasures. On the 15th, while evacuating to Tokyo, where his wife's parents lived, Takata went to the Mito branch office of TEPCO and handed over the J-Village keys himself. Furthermore, on 19 March, TEPCO reported that the Self-Defence Forces would use J-Village, and on 20 March, the government requested to use the J-Village fields for decontamination work. “Responding to the nuclear plant accident was an issue we had to deal as a whole country. I immediately realised that this was a serious situation and that we had no choice but to cooperate.” He accepted all requests without a pause and reported to JFA General Secretary TASHIMA Kohzo (current JFA President) after the fact.

At the time of the earthquake, J-Village staff included locally hired staffs in addition to those assigned from TEPCO and other supporting companies. There were about 25 full-time employees working at the fitness gyms and sales positions. Initially, it was estimated that it would take more than a year to resume operation, but as time progressed, that number became increasingly unrealistic. Therefore, employees who had the chance to change jobs were allowed to change jobs. Still, 17 employees remained. “With the earthquake, tsunami, and the nuclear accident, they have already suffered enough. Telling them that they have to become jobless because it is difficult to continue the business here, was something we had to avoid at all cost.” So, the first thing Takata had to do was to guarantee the livelihood of his staffs. Regarding their salaries, he asked those with higher salaries to reduce the amount, while guaranteeing full salary to those who made less. However, if they did nothing as a corporation, the funds reserved will eventually be exhausted. He also thought that if he closed the company, it would never start up again. That is why Takata was desperate to keep the company running.

In July 2013, the J-Village reconstruction project was launched within JFA. At the same time, Takata retired from the position of J-Village VP when he turned 65. Currently, he is the general manager of the football club at Higashi Nippon International University in Iwaki City, Fukushima. He decided to stay in Tohoku because he wanted to see the entire reconstruction process of J-Village and Fukushima. “I was a coach when we first launched the J-Village, so I my focus was on the content of the instruction rather than the facility. However, when I became in charge of the facility, I realised that the hardware is also very important. That is why J-Village itself is valuable.”

In April of this year, JFA Academy Fukushima boys’ team will make their return to J-Village. The affected areas, including Fukushima, are still in the process of reconstruction. However, there is no doubt that we are making forward progress toward the future. 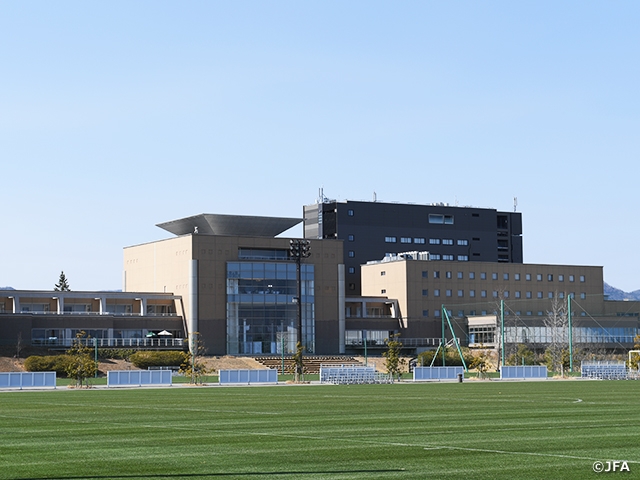