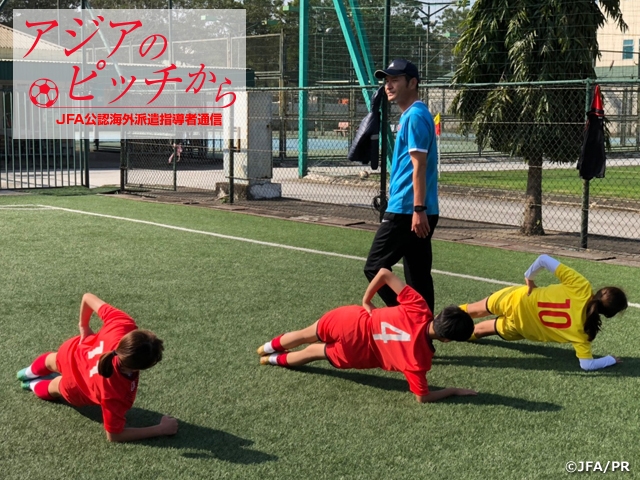 The AFC Women's Asian Cup India 2022™, in which the Vietnam Women's National Team competed in, saw Japan finish third, missing out on their third consecutive title, while China PR emerged victorious. In this tournament, which also served as the qualifier for the FIFA Women's World Cup Australia & New Zealand 2023™, the Vietnam Women's National Team lost in the quarterfinals but won the play-offs to qualify for the FIFA World Cup™ for the first time in the history of both men's and women's football in Vietnam.

Before and during the tournament, most of the participating teams were affected by Covid-19. The Vietnam Women's National Team also suffered a cluster of Covid-19 cases during a training camp held before the event, which could have forced the team to withdraw from the tournament. On the first day of the tournament, we had only 13 players, which was barely enough to be eligible to compete, but as the tournament progressed, players started to come back, and from then on, we were able to fight through with great resilience and unity, which are the strengths of the Vietnamese players.

The men's national team are extremely popular in Vietnam, with TV ratings occasionally exceeding 70% for their matches. Women's football, on the other hand, are considerably less popular and virtually unknown. However, the fact that we are participating in the FIFA Women's World Cup™ for the first time should raise the profile of women's football in the country, which will be beneficial in many ways. So in that sense, qualifying for the FIFA Women's World Cup™ was a significant achievement with massive implications for the future.

“Real repetition” and its outcomes

Inspired by the words of Mr. Claude DUSSEAU, former JFA Academy Technical Advisor, who advocated the importance of “real repetition,” we decided to implement the concept of “recognition ⇒ decision ⇒ action under high intensity” as the core pillar of the Vietnam Football Federation (VFF) Girls' Academy U13, which was launched in September 2020. Since many of the players at the academy are new to football, we have incorporated simple drills (triangle passes/square passes) into our daily routine. In Japan, these are considered as C License coach training menus from a little while ago. Similar trainings had been done in Vietnam, but the staff and players seemed perplexed by my insistence on “real repetition” at first.

We gradually added more tasks such as “looking, adding movements, approaching the ball, pass-and-go, using the far foot, using both feet, against a defender,” while patiently taking the time to adapt to the needs of the Vietnamese players. Fortunately, because we started with so many beginners, very few players are displaying strange habits or erratic movements. Also, due to the diligent nature of the Vietnamese people, the players quickly picked up the skills and started to show gradual improvements after a year or so. They are now capable of playing “football.” The players are now “looking” at their opponents to position themselves, making adjustments according to the situation, and improving their timing to receive and deliver passes.

It is with the deep understanding and cooperation of the academy staff that we have been able to continue our training with a focus on “real repetition.”

We still have a lot of work to do, but we intend to continue building on the fundamentals while adapting them to the Vietnamese culture.