Close
HOME > CSR > NEWS > From Pitches in Asia – Report from JFA Coaches/Instructors in Asia Vol.19: YAMAZAKI Shigeo, Coach of Timor-Leste U-21 and U-19 National Teams

From Pitches in Asia – Report from JFA Coaches/Instructors in Asia Vol.19: YAMAZAKI Shigeo, Coach of Timor-Leste U-21 and U-19 National Teams 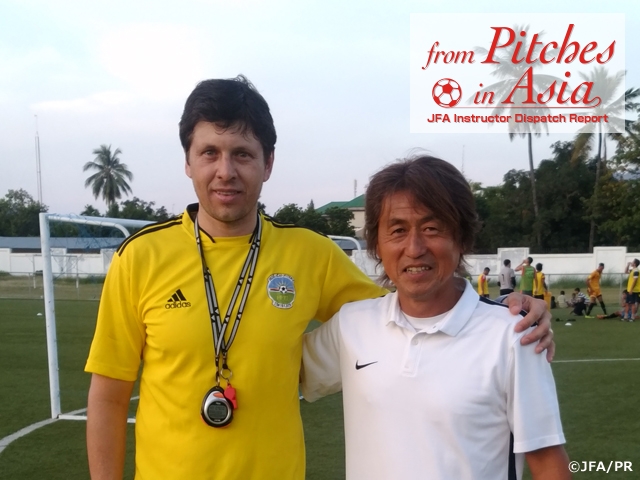 The nineteenth edition of “From Pitches in Asia”, in which we introduce the viewpoints of instructors active in Asian countries, is written by YAMAZAKI Shigeo, Coach of Timor-Leste U-21 and U-19 National Teams.

The town I live in is a quiet area where Portuguese and other Japanese expats live. Federação Futebol Timor-Leste (FFTL) that I work for, a supermarket and cafes are close by and if I go a little farther, Japanese restaurants are also available. One time when I bought tomatoes at a small vegetable store by the coast, this kid who was about 10 years old called me “Coach!” and gave me mini bananas for gifts. I guess he recognised my face from the football school at FFTL and it was a heart-warming experience.

The people’s interest for the national team is very high. They come to watch trainings of the senior and the U-19 national teams every day. I heard the World Cup qualifiers held in the capital city of Dili two years ago attracted such a big audience that people watched the match not only from the stands but also by climbing up fences and light poles. During the EURO 2016, a lot of people came out to the streets to celebrate loudly after every Portugal’s win, and on the day before the final, the Japanese embassy in Dili even sent out an E-mail to Japanese people here to be alert of the situation.

The strong points of the players are being physically quick and agile and having soft ball touches. And they are always willing to do their best to meet my expectation although it sometimes takes time. Players are very positive and full of smiles after every practice. On the other hand, their levels of fundamental skill and decision making needs to be improved.  And also they are not able to take full advantage of their strong points in matches. Their surroundings such as nutrition, housing situations and education may be affecting their football plays.

Since I started coaching here, players pay more attention to how other players play. Their positioning has also changed. In offence, they position themselves more with effective distance with defenders and receive balls at right timing. In defence, they are now able to go ahead from a covering position to take balls. Nowadays, more and more players understand the importance of details such as where to keep the ball around your feet, from what angle they should support each other, and how they cover dangerous open space. 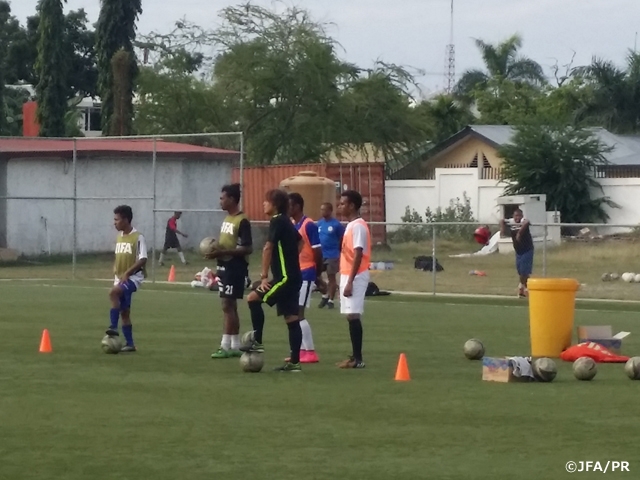 This year, Liga Futebol Amadora, the first-ever football league in Timor-Leste, has started. Although it is an amateur league, clubs have trainings every day and some of the players receive compensation. Liga finished its season at the end of July, but player movements from a club to another have been already reported and players’ motivation for the next season is very high. It has made a big change in the Timor-Leste football. At its peak, the audience easily reaches 1,000 and they cheer very enthusiastically.

The start of Liga also changed our yearly schedule dramatically. The problem we faced was they do not have any organisation to coordinate schedules of the league and also national teams. Since most of the clubs do not have their office, the invitation letters from FFTL do not reach clubs.  For this reasons, we could not start training for the national team at the right time.  FFTL sent out the invitations again to each club, and I also visited clubs myself to explain our schedule plan and seeked for their understanding and supports. Also, President of the Liga, Mr. Alex, gathered club presidents for a meeting at a stadium and helped them to have better understading about our activities. That was very helpful, and people has become supportive to national team activities.

There were some days when only handful of players gathered for training, but once club presidents and coaches realised that players’ performances were improved after coming back from training of national teams, those clubs’ performances and ranking in Liga also improved. So we gradually have more participation at our training.

For AFF U-19 Championship

The AFF U-19 Championship will be held in Vietnam in September for ASEAN countries. Timor-Leste is in the same group as Vietnam, Malaysia, Singapore and the Philippines. Our goal is to advance to the knockout stage. We will try to win every match with consistent play with good strategies.

While the first match of this tournament is scheduled on 11 September, the first match of the AFC Asian Cup 2019 Qualifiers Playoff is scheduled on 6 September. Currently six U-19 players are also selected to the senior national team. So we are in discussion with the senior team’s coach Fabio to plan the activities of both national teams. I consider it very important how I can build a strong tie among the U-19 national team players, so every day I see coach Fabio and have enough communication with him in terms of practice details and player substitutions.

In Timor-Leste, Japanese coaches have been working for many years. What the coaches in the past have built is “trust.” Doing good logical coaching and maintaining discipline and earnestness toward football in their personality have been the two major elements in their achievement and legacy. They were never easy on themselves and they face everything earnestly. Based on fundamental and individual qualities those coaches have built, I will work to add up more of engagements in group and in the team.

After half year, I have better communication with people in Timor-Leste. The speed of things moving forward is different from that in Japan. So I always try to have good communication with the people at the FFTL office. They give me many useful advices, and the fact that there are still people who have been supportive since my predecessor Mr. KOGA Takuma was here is also a reliable part of legacy.

HOME CSR NEWS From Pitches in Asia – Report from JFA Coaches/Instructors in Asia Vol.19: YAMAZAKI Shigeo, Coach of Timor-Leste U-21 and U-19 National Teams