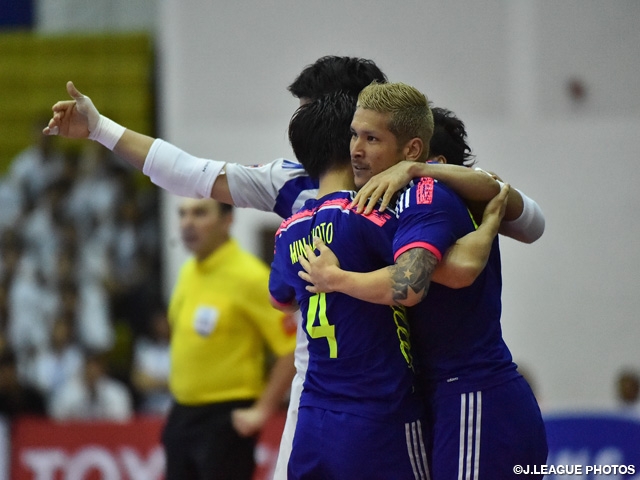 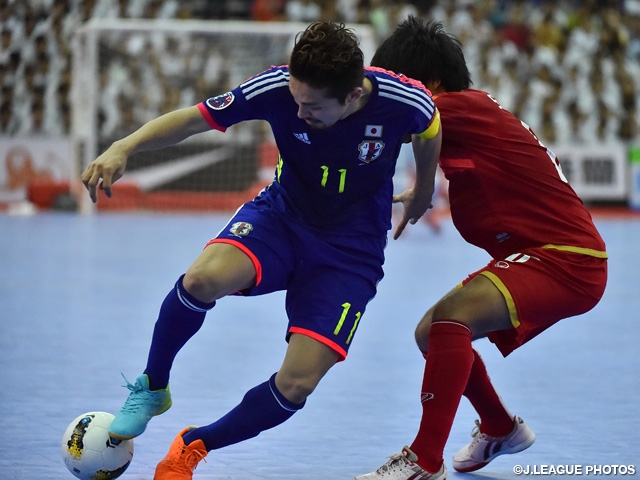 The Japan national team, who qualified through their group as the runner-ups, played their quarterfinal match against Thailand, with whom Japan competed with in the final of the previous tournament.

Team Japan had an analytic meeting of Thailand before their lunch time, preparing for the game.

The match began with the kickoff of Thailand. As in their previous contests, Japan grabbed the momentum with their defense in the front. Offensively, they created chances taking advantage of one-on-one situations in the Ala positions, but they would not be able to score.

On 7th minute, Nibuya netted a sliding goal on a cross of Minamoto from his right, breaking the deadlock tie. With that score, Japan earned a pace and added another goal as Osodo, who robbed the ball off an opposing player and brought it before the goal by himself, made a shot to give him team a 2-0 lead.

But Japan committed their sixth foul to give Thailand their second penalty kick, which the opponents made, and entered halftime with a 2-1 score.

Thailand, who got some momentum back with their goal before halftime, coming aggressive on Japan both offensively and defensively from the early second half. Japan managed to handle their fierce attacks, yet their defense got off-balance by Thailand, allowing them to equal the contest on 25th minute.

Japan, however, did not get let down by that and quickly re-established themselves from defense, and regained the momentum by possessing the ball. And then, Morioka fired a shot for a go-ahead score in the 36th minute.

Thailand then came on with power plays, but Japan survived their surge and finished the game ahead 3-2, clinching the ticket for the semifinals for the 13th straight time in the tourney.

Miguel Rodrigo, Head Coach
It was a very tight game and a contest that eight side could have won it. But we had more shots than them. Thailand were lowering their defense until about the 15-meter line, trying to have counter attacks by seducing us. We kept our attacks even after we took the lead by two goals, but our shot chances decreased and it gave them some energy and allowed them to take the momentum. We had hard times with that pace until about the 7th minute in the second half, but we had a great save by our goalkeeper Fujiwara and retrieved the momentum back to us and scored the third goal. We first played in a 2-2 formation against their power plays but did not work out, so we made it back to a 1-2-1 and were abele to preserve the lead until the final whistle. This game ended up being something that we were given a big mental test, but successfully overcame it. We have our semifinal match tomorrow against Kuwait, led by a great head coach. They possess a variety of tactics and a lot of offensive options. We would like to get the momentum in our hands by being aware of our defensive plays and do our best to post the victory in the end.

HOSHI Shota（Bardral Urayasu Futbol Sala）
It was a very tough game, but we were able to earn the victory taking advantage of our past experiences. Our mood on this team is getting better as guys keep supporting their teammates and encouraging them, no matter how bad of a situation they are in. I believe that if we keep believing in ourselves with that mood, we will be able to grab the title. We have another game tomorrow, so we want to rest well for that.

NIBUYA Kazuhiro（Vasagey Oita）
We gave up two goals after we built the lead of two. We allowed Uzbekistan to come from behind and lost in the group stage. But in this game, we were still having fun even after we were tied, keeping our composure, and could still win it. We have our semifinal game tomorrow, so we want to make some growth, playing as the team, and earn another win!

FUJIWARA Jun（Bardral Urayasu Futbol Sala）
It was a tough game but we came on top. It was a game that either team could have won it, but we ended up being the winners. That is a prof of our growth. But at the same time, we have not achieved anything yet. Our goal is to go to the final and play against Iran. In order to do that, we must win tomorrow’s game against Kuwait. We have received so much support here and from Japan. We would like to become as one and win it.

OSODO Nobuya（Vasagey Oita）
We played against Thailand, who were very tough opponents. It was a game in the knock-out stage, in which if you lose, you are gone. Really, we were forced to play hard until the very end, but we were able to come out on top because we played as the team. We want to enjoy the tough experiences and pressure in these games, and channel them into some power for us. We will play as hard as we could in tomorrow’s game while we have the emotions of a lot of people in our chests. 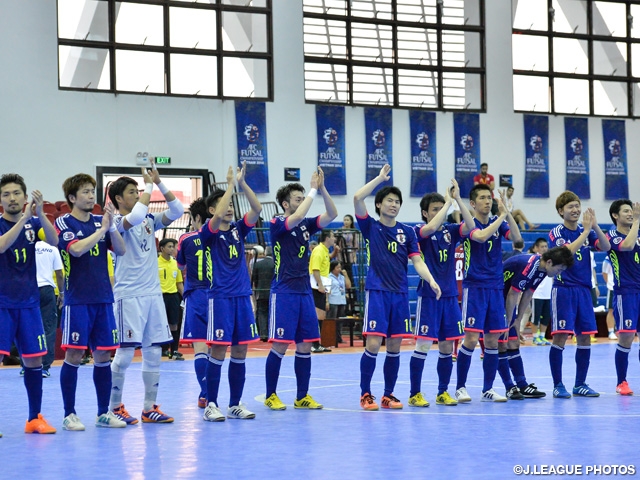